I did not enjoy absolute power as prime minister: Imran Khan 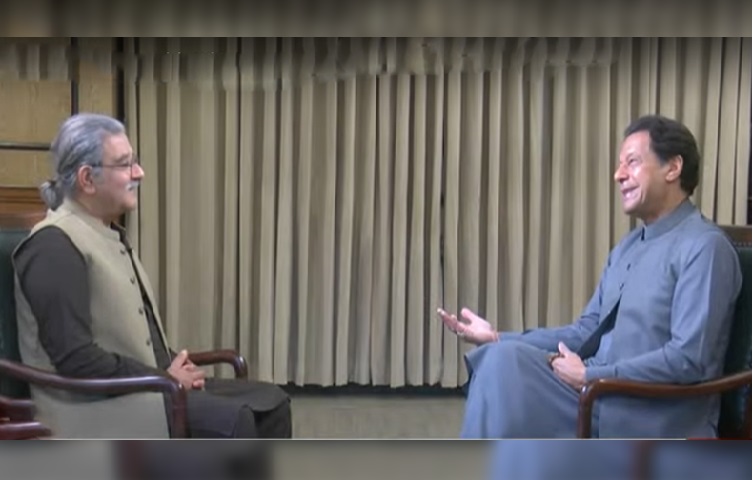 ISLAMABAD: The PTI chief Imran Khan admitted he did not enjoy absolute power as the prime minister, indicating that the actual centres of power in the country lay elsewhere and "everyone knows where that is."

"We will see if they allow us to go towards elections through legal and constitutional means otherwise this country will go towards [a] civil war," he said in an interview with anchorperson Sami Ibrahim for Bol News programme Tajzia.

Imran further said there was "no question" of returning to the National Assembly as that would "mean accepting the conspiracy" that had removed his government.

He said he was waiting for the apex court to decide on his party's plea to provide protection to the protestors, after which he said he would issue the date for the next march.

In the interview, Imran was asked to recall the events of the night of the no-confidence vote against him, who was issuing orders and who had impeded the cases against the PPP and PML-N leaders.

Imran said his government had been "weak" when it came to power and had to seek coalition partners, adding that if the same situation were to arise again, he would opt for reelections and seek a majority government or none at all.

"Our hands were tied. We were blackmailed from everywhere. Power wasn't with us. Everyone knows where the power lies in Pakistan so we had to rely on them," he said without elaborating any further who he was referring to.

"We relied on them all the time. They did a lot of good things too but they didn't do many things that should've been done. They have the power because they control institutions such as NAB (National Accountability Bureau), which wasn't in our control."

He claimed that while his government had the responsibility, it did not have all the power and authority.

Imran said it was imperative for the country to have a "strong army" due to the threat posed by the enemies but said there was also the need to strike a "balance" between having a strong army and a strong government.

The PTI chief said the current political situation was a problem for the country as well as the establishment. "If the establishment doesn't make the right decisions then I can assure in writing that [before everyone else] they and the army will be destroyed because what will become of the country if it goes bankrupt," he said.

"Pakistan is going towards a default. If that happens then which institution will be [worst] hit? The army. After it is hit, what concession will be taken from us? Denuclearisation."

Imran said he had "clearly told the neutrals" that the PTI government's economic performance, despite the Covid-19 pandemic, was nothing short of a "miracle".

"I told them if you do this and if this conspiracy [to remove my government] is successful then our economy will go down," he said, adding that he had also sent former finance minister Shaukat Tarin to give a presentation.

He said the country stood on the cusp of a "defining moment", calling it a "trial for the establishment". "Everyone knows they're the powerbrokers, so they're on trial. This is a trial of the judiciary and the Supreme Court [as well]."

Imran said that if Pakistan were to lose its nuclear deterrent capability, it would be fragmented into three pieces. "If the right decisions aren't made at this time then the country is going towards suicide," he warned.

Prodded further to share his thoughts on the night of the no-confidence vote, Imran declined to go in details and said: "History never forgives anyone. Things come out. If you ask me, I won't go into details, but when history will be written then it'll be counted as such a night in which Pakistan and its institutions were damaged a lot. "Those same institutions weakened Pakistan which give it its foundation and strengthened it."