I will not accept the US slavery at any cost: Imran Khan 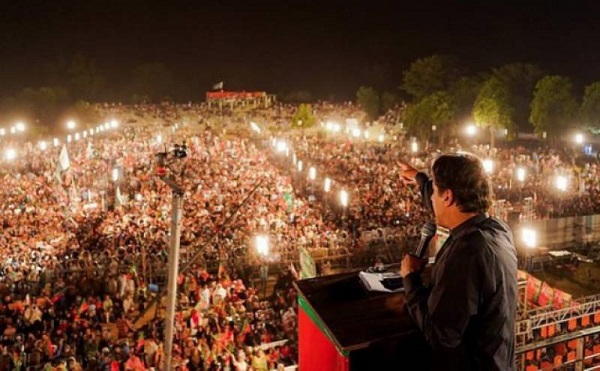 GUJRANWALA: Former prime minister and Pakistan Tehreek-e-Insaf (PTI) Chairman Imran Khan on Wednesday said, “We reject regime change through a US conspiracy. I will not accept the US slavery at any cost. I invite all youths, mothers and sisters to join PTI’s Islamabad long march, not for Imran Khan but for Haqiqi Azadi [real independence] and for the future of your children,” he added.

Imran said, “I am calling you to Islamabad for two reasons: one is to expose the American conspiracy, and the other is to tell these thieves and robbers that we are a free nation.”

Addressing a rally in Gujranwala, he said police officials would also send their families with the participants in the long march to the federal capital.

“Not only police officials, the families of government servants would also be joining. I also know that the families of my army will also be coming with us, God willing,” the ousted premier said. He regretted that the country’s biggest thieves had been brought together to overthrow an elected government through a “foreign conspiracy”.

Imran Khan said: “I have played cricket for 21 years, but I have never seen so many people in the stadium. I had no idea that so many people would come to attend the Gujranwala jalsa. This is not politics but a revolution is coming. All the dacoits were on the one side, and my nation is standing on the other side; this is called revolution. I thank all of you.”

The former PM said his party’s long march would remain peaceful. “It will be a peaceful protest by millions of people,” he said. He alleged that “imported government” would make all efforts to abolish cases against Shehbaz Sharif and his family. “The PTI will not allow Shehbaz to abolish cases against him and his family,” he said. He said Pakistan was put on the way to prosperity in his government tenure. Country’s wealth was increasing in the fastest way in the history of Pakistan. The largest exports in the history of the country took place in the PTI period; Pakistan’s imports increased by 26pc in the last one year and after Ayub Khan, Pakistan’s industry grew the most.”

Imran Khan said Pakistanis abroad sent $31 billion in remittances. “We collected the highest taxes in the history of Pakistan, which is why we have reduced the price of petrol in our country and reduced the burden on our people,” he said. Imran said that his government helped farmers and they benefitted the most during the two years of the PTI government.

Berating the Sharif brothers, the PTI chairman said: “Shehbaz Sharif is asking what to do after becoming the prime minister.” He said that inflation was rising and foreign exchange was tumbling. “The two brothers (Shehbaz and Nawaz Sharif) are now trapped and they are wondering what to do.”

He said that PM Shehbaz thought he would save himself from the Federal Investigation Agency (FIA) after becoming the prime minister. He warned the PM that he would recover all the looted money from him and send him to jail. Khan thanked the Supreme Court for serving justice to those “who sold their consciences (turncoats).”

Separately, addressing a lawyers convention at the Aiwan-e-Iqbal, Lahore, Imran asked if it was justice that the FIA had been made hostage by the incumbent premier Shehbaz Sharif. He vowed “we have to make our country greater by burying the thieves as well as the slavery of the United State of America”.

“Not for me, but you have to stand up for your families, your children and for the sake of your country,” he added. “You have to make Pakistan a sovereign country by struggling and raising voice against the cruelty and thieves,” he added. “It is history of our country that any movement which the lawyers joined became successful,” the ex-PM recalled.

Imran Khan emphasized lawyers to move to the courts and ask one question: if there is permission for robberies, and why the poor masses had been detained in jails, and why they were not released from jails like the current rulers. He said the FIA had constituted money-laundering and other cases against Shehbaz, but he was using his position as prime minister of Pakistan to give himself and his family an NRO [abolition of all cases] by influencing the FIA.

The PTI chairman invited the legal fraternity to start what he called a ‘jihad’ along with the PTI for the survival of the country. He sought support of lawyers to make his movement successful. “Lawyers, I need your support to make this movement successful,” he said. He said it had been clearly mentioned in Holy Quran that one of the objectives behind sending human beings on earth was to ensure provision of justice.