If no vaccine, seven times more likely to contract the coronavirus: Asad Umer 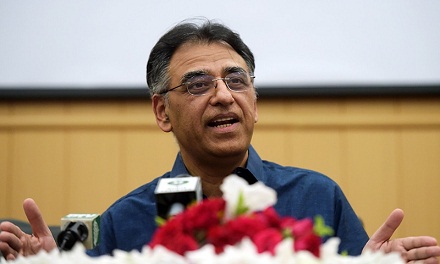 ISLAMABAD: Minister for Planning, Development and Special Initiatives Asad Umar called on people to get vaccinated at the earliest as those who had received no vaccine were seven times more likely to contract the virus than those inoculated.

Briefing the media after the National Command and Operation Centre (NCOC) meeting, the minister said vaccination was the only way out of this health crisis.

Later, in a tweet, Mr Umar said: “The data analytics run by the ncoc team shows that comparative data of Pakistani’s who have been vaccinated versus those who are not vaccinated shows a marked difference in risk. The un vaccinated pakistani’s are at 7 times higher risk of getting covid. Please get vaccinated.”

1Accompanied by Special Assistant to the Prime Minister on National Health Services Dr Faisal Sultan, Asad Umar, who also heads the NCOC, said from Feb 3 to July 1, 17.7 million people had received vaccines, out of whom 6.2 million got both jabs.

During this period, he said 490,000 cases of Covid-19 were reported that accounted for 0.3pc of the whole adult population (18 years and above), which was around 125 million in the country.

He said 0.08pc or 9,917 cases were reported among those who received the first dose whereas 0.04pc or 5,500 people with complete vaccination were infected by the virus.

“Health experts, doctors or scientists are not giving their personal opinion, but basing their analysis on results of vaccinated people,” he said.

The minister said as per data, condition of those people did not worsen who contracted Covid-19 after getting vaccinated.

He said so far 20 million people had been administered vaccines in the country, with 500,000 getting inoculated daily for the last four days.

Talking about the Delta variant, Mr Umar said the strain had affected the entire region but the good news was that if a person was vaccinated, the risk was minimal. He urged people to remain in their houses during Eidul Azha and follow the necessary guidelines to avoid the deadly virus.

Speaking on the occasion, Dr Faisal Sultan said everyday around 2,500 new cases were being reported, warning that the Delta variant was spreading fast. Meanwhile, the infection rate jumped to 6.1pc in the last 24 hours – the highest since May 21 when it was recorded as 6.44pc. A day earlier the ratio stood at 5.2pc.