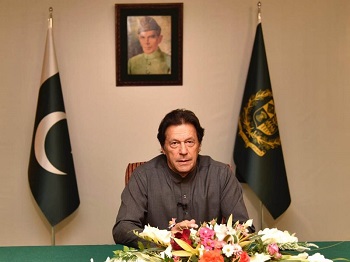 ISLAMABAD: Prime Minister Imran Khan on Sunday appealed to the people to go for self-quarantine, saying this was the best precautionary measure to prevent spread of the deadly coronavirus since the government could not lock down the entire country keeping in view multiple problems the move would create.

He also urged the nation not to go for panic buying and avoid storing food and other essential items in large quantities as this act might create and artificial food shortage in the country.

In his short address to the nation, Mr Khan said: “Lock down yourself because if I lock down the entire country it will create a lot of problems.”

“Keep yourself in self-quarantine in your homes and I hope you [people] will not disappoint me,” the prime minister said, adding that panic was a bigger threat than coronavirus.

The prime minister assured the nation that the government was extremely vigilant about food security situation and expressed the hope that there would be no shortage of food items during these testing times.

“We have no shortage of food items in the country, but if the rich and the well-off start piling up food items in their homes, it may lead to an artificial shortage, forcing other people to rush to markets for panic buying,” he added.

“I and my team are working day and night to tackle the situation in the best possible way to steer the business, economic and industrial sectors of the country out of the current economic slowdown,” he said, adding that he would announce a comprehensive economic plan on Tuesday.

The nation, he said, should have full confidence in the government and its economic team as it was fully alive to the emerging situation and devising a mechanism to provide maximum relief to the people by mitigating their problems.

He appealed to the media to help the government face this challenge successfully, noting that media had an extremely important role to play in the pandemic.

The prime minister said the government had already ordered closure of all shopping malls and markets and called off all cricket events.

The prime minster also lauded the role of overseas Pakistanis and the huge support they had provided to the nation and the government on those two mega tragedies the country and its people encountered.

Mr Khan said the government badly needed the nation’s complete support and cooperation in tackling Covid-19 threat as any slackness or irresponsibility on their part could lead to serious consequences for all the people of the country.

He expressed the hope that the nation would come out of the challenge successfully by taking precautionary measures as the Chinese nation had done, responding to and fully cooperating with their government.

“If our nation imposes self-discipline and self-quarantine itself like the one did by the Chinese nation, we will definitely come out successful of the current situation,” Mr Khan said.

“I have a firm trust in the nation as it has always come out of trying times successfully. I am proud of my nation which faced difficult times in the past, too, and I have strong hope that this time, too, it will not let me and the government down,” the prime minister said, citing examples of 2005 earthquake and 2010 floods which had devastated the country and its economy, but the entire nation stood up to these challenges and successfully steered the country out of these catastrophic incidents.