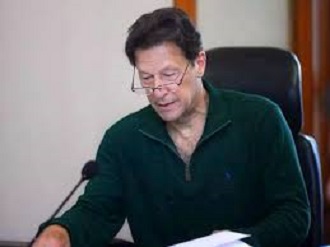 ISLAMABAD: Prime Minister Imran Khan has again appealed to the leaders of rich countries, the UN secretary general and heads of financial institutions to give debt relief to developing countries like Pakistan so that they could combat the deadly Covid-19 in a better way.

In a video message to the international community broadcast by TV channels on Sunday, the prime minister highlighted the difficulties being faced by the developing countries, particularly those burdened by heavy debt, in handling the situation and said the biggest challenge for nations in the developing world was to save their peoples from dying of the pandemic and hunger due to extended lockdowns triggered by the disease.

Mentioning the huge relief packages announced by the US, German and Japanese governments in their countries to cope with the situation, the prime minister said that the maximum “we could afford was $8 billion”.

“This is the issue with most countries of the developing world suffering from a very high debt to the GDP ratio, so the problem in these highly indebted countries is that they now face lack of fiscal space,” Mr Khan said, adding: “We do not have the money to spend on already overstretched health services, and secondly, to stop people from dying of hunger.”

“Therefore, I appeal to world leaders, to UN secretary general (Antonio Guterres) and to heads of the financial institutions, to launch an initiative, an initiative that will give debt relief to developing countries to combat the coronavirus,” he said.

Pakistan’s total debt and liabilities, at the end of December last year, stood at about Rs41 trillion, which is almost 94 per cent of the country’s GDP.

In his opening remarks, PM Khan compared the difference in approaches of the developed and developing countries in the fight against the pandemic.

“As the global response to the crisis unfolds, we see two different responses,” he said, adding that the developed countries had adopted a policy to first focus on containing the virus through lockdowns and then dealing with the economic impact.

“To give an example of Pakistan with a population of over 220 million people, so far the maximum stimulus we could afford is $8bn, and this is the issue with most of the developing countries,” he said.

The prime minister has already set up a Coronavirus Relief Fund account and appealed to the people to make generous donations in it to help the government fight the pandemic and to provide ration and relief to people living under the biting lockdown for almost a month.