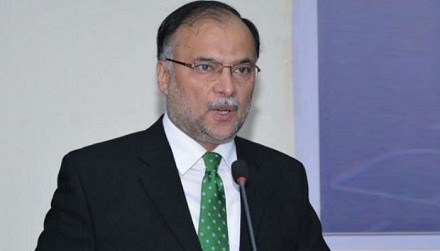 ISLAMABAD: The Pakistan Muslim League-Nawaz (PML-N) alleged on Tuesday that the cricketer-turned-politician was brought to power to fulfill the “foreign agenda” of rolling back the nuclear programme.

“Who has given the right to this prime minister to say that Pakistan’s nuclear programme is negotiable,” wondered Ahsan Iqbal, the party’s secretary general during a lacklustre and over-stretched debate on the federal budget in the National Assembly.

Mr Iqbal was referring to the reported interview of Prime Minister Imran Khan to a US journalist published in newspapers on Tuesday.

“The moment there’s a settlement in Kashmir, I believe the two neighbours will live as civilised people. We will not need to have this nuclear deterrence,” Mr Khan had reportedly said.

“The cat is now out of the bag. Imran Khan has been brought (to power) to roll back Pakistan’s nuclear programme. This is the agenda of the foreign donors,” he stated, alleging that the purpose of giving the statement was to send a message that Pakistan was ready to roll back its deterrence. “Pakistan’s nuclear deterrence is non-negotiable,” he declared.

A number of treasury members spoke after Mr Iqbal, but no one specifically responded to the PML-N leader’s comments.

Speaking on the budget, Mr Iqbal warned that a new and “worst wave” of price hike would hit the nation after passage of the finance bill. He said Pakistan was nowadays passing through a “non-planned phase” due to “directionless policies” of the present government.

He criticised the prime minister for declaring Pakistan a country of “the corrupt and money launderers” in his speeches at international forums, observing such remarks were enough to frighten away investors.

He alleged that ministers wanted to make the CPEC projects controversial through their statements.

“Today China has gone to Iran with a $400 billion package,” he said.

Referring to repeated allegations by ministers that the previous government had set up expensive power projects, Ahsan Iqbal said all the projects had been approved by Nepra after strict scrutiny and if these projects were not viable, the PTI-led Khyber Pakhtunkhwa government was also responsible for it as the projects were approved by representatives of the federal and provincial governments.

The PML-N leader ridiculed a statement of Defence Minister Pervez Khattak that there was no poverty in KP, saying “this is why we call them selected (people)”.

He said the defence minister, who had served as the chief minister of KP, must know that according to the government’s own survey, out of the 32 most poverty-stricken districts in the country, 17 were in KP.