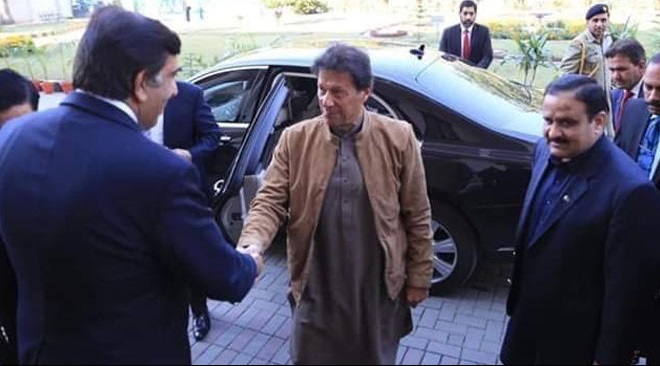 LAHORE: Prime Minister Imran Khan spent a hectic day in Lahore on Thursday a day after visiting Karachi on a similar mission and tried to rope dissidents into lending support to his government to bring it out of choppy waters.

The prime minister got briefings on the political developments in the province and sought assurances from some “suspect” parliamentarians amid rumours about their support to the opposition aspiring to government ouster through a no-confidence move.

Rumours about change of Chief Minister Usman Buzdar also surfaced earlier in the day and several names were highlighted on electronic media but they eventually died down.

Special Assistant to the Prime Minister on Political Communication Shehbaz Gill tweeted that “the decision power to change the Punjab chief minister or not rested with the prime minister alone and he would take this decision on his own convenience”.

“Islamabad is the live battleground at this point of time and the party leadership’s prime focus is to fail opposition’s no-confidence motion and expo­­se the opposition leaders and their foreign masters,” Mr Gill stated in his tweet.

The prime minister began his day in Lahore by holding meetings with Governor Chaudhry Sarwar and Chief Minister Usman Buzdar and discussed political developments in Punjab. He also got insight into the dissident groups’ strengths and demands.

The premier held meetings with the provincial ministers including those who are rumoured to have joined hands with the dissident groups or the opposition in Punjab. He also held mee­tings with women MNAs and MPAs in the CM’s office conference room.

The prime minister also held meetings with provincial ministers Samsam Bukhari and Hashim Dogar who had gone to meet provincial minister Nauman Langrial — a leader in the absence of Jahangir Tareen. The premier also met ministers Dr Akhtar Malik and Asif Nakai who had earlier gone to attend the luncheon hosted by Aleem Khan. The ministers expressed their unconditional support to the party and the chief minister.

Mr Niwani said those against the government were facing hardships as is evident from sealing of transport and petrol pumps of group’s top tier provincial minister Ajmal Cheema.

Meanwhile, the Aleem Khan group distanced itself from Tareen group’s decision to not meet the prime minister and allowed its members to attend the MPAs’ meeting.

Aleem Khan group spokesman Mian Khalid Mahmood said the group members were going to meet the premier and the chief minister with the permission of Aleem Khan who is currently in London. “Further decisions will be ta­­k­­­en at a meeting to be chaired by Aleem Khan soon,” Mr Mahmood added.

The prime minister at a meeting with the party MNAs and MPAs asserted that the opposition would fail in all its shenanigans and asked them to focus on infrastructure development activities across the province.