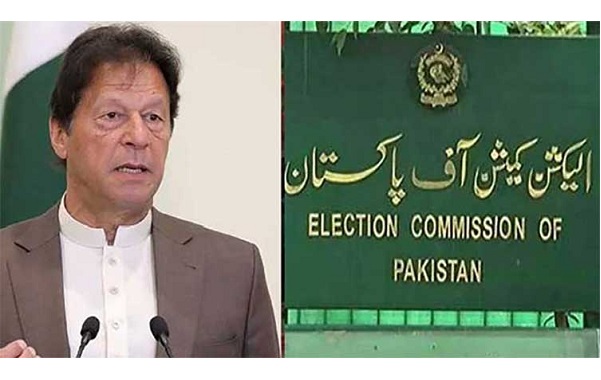 Rejecting what he called a “PTI-specific draft amen­d­ment,” Mr Khan said overseas Pakistanis are as loyal to the country as other Pakistanis.

Meeting a select group of reporters here Khyber Pakhtunkhwa House, Mr Khan said his party will also consider challenging the changes in a court of law.

Under the proposed ame­n­d­ment to Rule 157(2) of Election Rules, the party head will be bound to provide a certificate that the list of two thousand members, provided with registration documents, does not include any individual who was a dual national, resident of Azad Jammu and Kashmir and Gilgit-Baltistan or involved in any financial irregularity and anti-state activities.

Flanked by party leaders Asad Umar, Fawad Chaud­hry and Shibli Faraz, Mr Khan predicted that the country’s politics will “change massively” following the upcoming general elections, which he said his party will sweep despite political engineering.

Sindh will witness the biggest revolution as a PPP victory was impossible this time around, he said.

He claimed that the public support for PTI was so huge that manipulation of election results would not be possible.

“To rig the forthcoming elections, one would need political engineering of such a degree that the system would collapse as it would not be able to sustain it.”

Reiterating his allegations against Chief Election Commissioner Sikandar Sultan Raja, Mr Khan said his party was ready to take part in elections held under the present election commission, but said Mr Raja had no moral ground to hold the office after the audio leaks from the Prime Minister’s House.

He said in one of the clips, the CEC could be heard taking instructions from PML-N supremo Nawaz Sharif.

“The CEC [Mr Raja] undertook an exercise for delimitation of constituencies in consultation with PML-N,” Mr Khan claimed.

Asked what was his expectation with regard to various cases against him pending with the ECP, he said he was sure the decision would be against him as the ECP chief “was being used as a tool.”

He also censured the ECP for not hearing foreign funding cases against PTI, PML-N and PPP together.

Talking about his plans to march on Islamabad, Mr Khan said it will be “the largest-ever gathering in the country’s political history”.

Referring to the possibility of government’s action to stop the march, he said the centre’s plan to stop marchers was known to all but his plan to counter the move was known to only a few.

He also defended his actions to purchase gifts from Toshakhana, saying that whatever he did was strictly within the ambit of the law and demanded open hearing of the case against him.

He, however, claimed that former president Asif Zardari bought three luxury vehicles while former premier Nawaz Sharif took home a luxury Mercedes car from Toshakhana, which he claimed was a “flagrant violation of the rules” as the two leaders paid a negligible amount.

Replying to another question, Mr Khan said the process to appoint the CEC, National Accountability Bureau chairman and caretaker government was flawed and needed to be replaced with a merit-based mechanism.