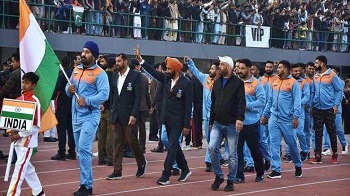 LAHORE: Pakistan Kabaddi Federation (PKF) on Monday rejected Indian authorities' claims that they had not "approved" any team to participate in the ongoing Kabaddi World Cup 2020.

Earlier today, the Indian authorities had said they had not approved any team from the country to participate in the Kabaddi World Cup currently underway in Pakistan, a day after the athletes arrived via Wagah Border. The statements had caused uncertainty over the status of athletes representing India in the world event.

Indian Olympic Association (IOA) chief Narinder Batra said he had "no idea" about the players who had gone to Pakistan as neither the IOA nor the Amateur Kabbadi Federation of India (AKFI) had approved any team to participate in the World Cup, The Hindustan Times reported.

"The IOA has not approved and it has also not been approved by the federation so I don’t know who has gone. Whether 60 or 100 have gone, I have no idea. The kabaddi federation, which is a member of IOA, has confirmed that they have not sent anyone. I have seen statements from the (sports) ministry which confirm they have not approved anyone. So I don’t know who they are and what the story is," he was quoted as saying.

SP Garg, the administrator of AKFI, also confirmed that the federation had not granted permission to any team to take part in the Kabaddi World Cup in Pakistan, adding that the authority discovered that players from India had gone only after information was sought.

For Indian teams to participate in international competitions, the relevant body needs to write to the sports ministry which then forwards the request to the Ministry for External Affairs and the Home Ministry for clearance, irrespective of whether it is a government-funded event or not.

While speaking to the media in Lahore, PKF President Chaudhry Shafay Hussain held "enemy elements" responsible for the confusion and said: "The fact is that the Kabaddi World Cup is being held in Pakistan for the first time. It was only held in India before.

"Some enemy elements are conspiring [against the event]." The PKF president also warned that a first information report will be lodged against those spreading "false propaganda".

PKF Secretary Rana Sarwar, while speaking to the media in Lahore, said that the Indian Kabaddi team was India's national team and cautioned against mixing sports and politics.

Sarwar urged critics to "check the rankings of all the players" in the Indian team. He said that the statements by the Indian officials were a result of internal rifts between national bodies.

All of the previous six-circle-style kabaddi world cups have been hosted by India with the most recent event taking place in 2016.

Pakistan is hosting the event for the first time this year. The tournament will be eight-days long with matches in Lahore, Faisalabad, Kartarpur and Nankana Sahib.

Other than India, teams from Iran, Canada, Australia, United States, Sierra Leone and Kenya are also participating in the event. Amid the ongoing confusion, the Indian side defeated Germany in a match.