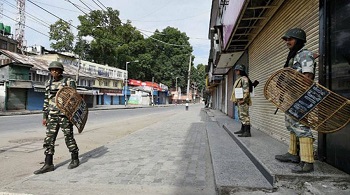 ISLAMABAD: India in violation of all international norms and UN-recognised disputed status of Jammu and Kashmir has granted domicile status to more than 300,000 non-residents, all Hindus, in Indian Occupied Kashmir (IOK).

News reports emanating from the occupied territory have revealed that since the new domicile law has been introduced by the Indian government for Occupied Jammu and Kashmir, the people fear that more than 800,000 Indian soldiers and over 600,000 migrant labourers present in the disputed territory may also be granted the domicile status in the days to come.

Kashmiri masses have a strong feeling that the people in power in New Delhi are working on an agenda of changing the demography of Jammu and Kashmir, rendering the territory into “Another Palestine in the making”. The efforts in this regard have been doubled since India abrogated Articles 370 and 35-A on August 05, last year, the reports said.

As part of the sinister move, the Indian government has also renamed the Jammu and Kashmir Property Rights to Slum Dwellers Act by deleting references to “permanent residents.” This has also made it easy for non-local slum dwellers to acquire property rights in the disputed territory.