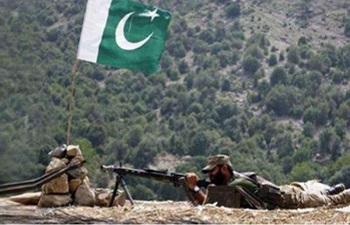 A two-year-old was kiled while four people were injured in indiscriminate firing in the last 24 hours by the Indian army in various districts near the Line of Control (LoC), Inter-Services Public Relations (ISPR) said on Monday.

According to the ISPR, Pakistan Army responded and "targeted those Indian posts which had initiated fire".

The two-year-old who passed away belonged to Dhunial sector, while four people, including a woman and a 72-year-old senior citizen, from Baroh, Rakhchikri and Chirikot sectors sustained serious injuries.

ISPR said that the injured have been evacuated to nearby medical facilities for treatment.

Taking to Twitter, AJK Prime Minister Raja Farooq Haider wrote: “Unprovoked, indiscriminate and unrelenting ceasefire violations by Indian Army were not only causing civilian casualties and damages but also disturbing our efforts to contain Covid-19 in areas along the restive ceasefire line [LoC].” “Will the [UN Secretary General] Antonio Guterres take serious note of this beastliness,” he questioned.

This is the third consecutive day that India has violated the LoC agreement. The two-year-old's demise comes a day after a four-year-old boy lost his life in Azad Jammu and Kashmir in Indian shelling from across LoC.