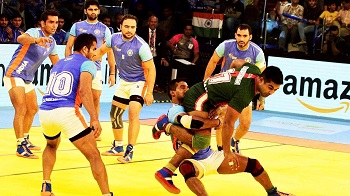 LAHORE: Iran face India in the first match at 1:30pm On Thursday, while the second match will be played between Sierra Leone and Germany at 2:45pm. Hosts Pakistan take on Australia in Thursday’s third and last match.

Canada, Iran and England won their respective matches on the fourth day of the Kabaddi World Cup (indigenous style) at the Iqbal Stadium in Faisalabad on Wednesday.

Canada’s Naveen was adjudged the best raider while the title of best stopper went to Canada’s Ravi Kumar in the first match. Iran’s Mesal Muhammadi and captain Ali Safari were declared best raider and stopper of the second match, respectively.