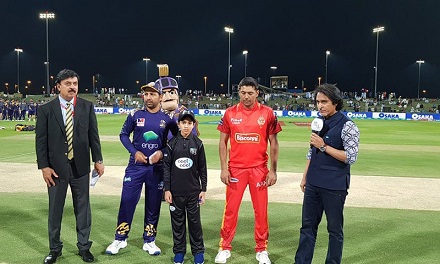 ABU DHABI: Islamabad United took second spot after they thrashed Quetta Gladiators by 10 wickets at Abu Dhabi’s Sheikh Zayed stadium. Usman Khawaja and Colin Munro who opened the innings for United gave a masterclass to the Gladiators on how to bat on the pitch.

Both the openers gave no respite to the Gladiators bowler with Naseem Shah, Khurram Shahzad, Jack Wildermuth, Mohammad Hasnain, Mohammad Nawaz and Zahid Mahmood looking helpless against the attack.

At the end of the powerplay, Islamabad United were 97/0. The onslaught by the openers helped United set the record for the highest score in the powerplay in PSL history.

No matter what the Gladiators captain threw at Khawaja and Munro they always had an answer to it.

And at the end of the 10th over Munro hit a six to wrap up the match for United. It was also the first time that a team won a match within 10 overs.

The Islamabad United now stand in second in the point table and the Quetta Gladiators from the point need to win all their matches to reach the playoffs.

Earlier, a brilliant bowling performance by United’s bowlers ensured that Quetta were restricted for a below par 133.

For the Gladiators, South Africa's Faf du Plessis and young gun Usman Khan had opened the batting, while Hasan Ali opened the bowling for Islamabad United.

The Sarfaraz Ahmed-led side lost du Plessis early in the innings and at end of the power play the Gladiators were 36/1.

As soon as the powerplay ended, Shadab Khan took charge of the attack and the decision proved fruitful as he dismissed Usman Khan, who was in fine touch, for 14.

The fall of the wicket had forced Sarfaraz Ahmed to promote himself up in the order but his stay at the crease was short-lived as Muhammad Musa sent him packing in the next over, putting Gladiators at 49/3.

Jake Weatherald, who had made 43, was helping Gladiators rebuild their innings before he was removed by Akif Javed. The Australian was trying to be cheeky against the bowler but the move proved too costly for him.

Andre Russell who had come in for the Gladiators was looking dangerous when he hit two sixes off Musa Khan. But in the next ball, a lethal bouncer by Musa hit the West Indian on his head and he was dismissed in the next delivery.

The blow was so lethal that the Gladiators had to call in Naseem Shah as the concussion substitute for Russell.

At the end of the 15th over, Quetta were 110/5 and had the perfect platform to launch themselves. But United’s bowling once again rose to the occasion and removed the last five batsmen to bowl the Gladiators all out for 133.

For Islamabad, Mohammad Wasim, Muhammad Musa and Hasan Ali took two wickets each, while Shadab Khan and Akif Javed took a wicket each.