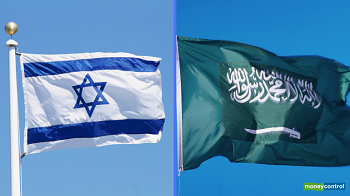 JERUSALEM: Israel on Sunday officially gave its citizens the right to travel to Saudi Arabia for religious and business visits, in the latest sign of warming ties between the two states.

The interior ministry’s announcement will have limited practical impact, as Israelis have been travelling to Saudi Arabia via third countries, especially Jordan. But Israel had never granted official approval for such travel by both Jewish and Muslim Israelis. Interior Minister Aryeh Deri “signed for the first time an order enabling an exit permit for Israelis to Saudi Arabia”, his office said.

Israel has a peace deal with two Arab countries — Jordan and Egypt — but its occupation of Palestinian territories has long served as a major factor preventing similar accords with the rest of the Arab world.

The interior ministry said its move, coordinated with the security and diplomatic services, approves travel to Saudi Arabia “for religious purposes during Haj and (for) Umrah”.

It said Israel would also allow its citizens to travel to Saudi Arabia “to participate in business meetings or seek investments” for trips not exceeding 90 days.

Business travellers must have “arranged their entry to Saudi Arabia and received an invitation from a governmental source”, the interior ministry said. There was no indication of a corresponding policy change from the Saudi side, but there have in recent months been gestures pointing to warming ties between Israel and Gulf states.

Earlier on Sunday, Israeli Prime Minister Benjamin Netanyahu praised Mohammed al-Issa, head of the Muslim World League based in Makkah, Saudi Arabia, for attending commemorations in Poland this week marking 75 years since the liberation of the Nazi death camp Auschwitz.

“This is another sign of change in the attitude of Islamic bodies and, of course, the Arab states toward the Holocaust and the Jewish people,” he told reporters.

Following the cabinet meeting, Netanyahu was headed to Washington to discuss US President Donald Trump’s project for peace between Israel and the Palestinians.

The Palestinians have rejected Trump’s initiative but the US hopes Saudi Arabia can pressure the Palestinian Authority to accept it, boosted by an economic component of the peace plan announced in June.

Common concerns over Iran are widely seen as having fostered incipient ties between Israel and several Arab states, especially in the Gulf.

Yoel Guzansky, a senior researcher at Tel Aviv University’s Institute for National Security Studies, called Israel’s announcement on the Saudi travel permits “normalisation kernels” between Israel and Gulf states, which he called “the worst-kept secret in the Middle East”.

Guzansky noted that while Israel no doubt timed the announcement to coincide with Netanyahu’s trip to Washington, its publication — especially ahead of the launch of the peace plan — could be “vexing” to the Saudis.