Japanese ppl to get behind Tokyo Olympics: IOC 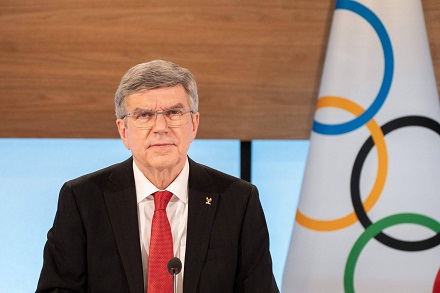 TOKYO: International Olympic Committee (IOC) chief Thomas Bach on Saturday urged the Japanese people to get behind the Tokyo Olympics as the first coronavirus case hit the Games Village, prompting fresh jitters about the health risks posed by the giant event.

Bach, who has faced scattered protests since arriving in Japan, appealed to the public to throw their support behind the athletes despite fears of a spike in cases as thousands of international visitors arrive.

The IOC president said he was “very well aware of the scepticism” surrounding the postponed 2020 Games, which have attracted low opinion-poll ratings for months.

“I appeal to the Japanese people to welcome these athletes here for the competition of their life,” Bach said, insisting the Tokyo Olympics were safe, calling them the “most restrictive sports event... in the entire world”.

“I would like once more to ask and to invite the Japanese people, humbly, to welcome and support the athletes from around the world,” he added.

Bach’s plea comes just six days before the opening ceremony for the Games, which will take place in bio-secure “bubble” conditions and largely without fans.

It also coincided with the first case in the Olympic Village, concerning an unnamed person who is now in isolation.

However, Bach said just 15 people had tested positive out of 15,000 arrivals in July, citing it as proof that the strict anti-coronavirus measures, including daily tests for athletes, are working.

He also held the door open to a possible return of fans if conditions improve, citing a communique issued after talks between the IOC, International Paralympic Comm­ittee, Tokyo 2020, Japanese government and Tokyo authority.

“We will keep monitoring the anti-Covid developments. And if the circumstances should change, then we do have another immediate five parties meeting to address this with the relevant anti Covid-19 measures,” said Bach.

Anti-Olympics protesters held up placards during Bach’s visit to Hiroshima on Friday and about 30 demonstrators were blocked by police outside Saturday’s IOC executive board meeting at a luxury hotel in Tokyo.

A welcome reception for Bach on Sunday will be attended by Japanese Prime Minister Yoshihide Suga and 40 guests, according to reports.

But Bach said “we are just guests” at the event, which will take place while Tokyo remains under a state of emergency.

Several competitors have expressed concern over conditions at the Olympics, which are marked by ubiquitous temperature checks, hand sanitiser and daily testing.

Organisers pledged full transparency about cases in the Village, and urged people taking part in the Games to stick by the anti-coronavirus rules.

“Athletes who are coming to Japan are probably very worried. I understand that,” Hashimoto said. “That is the reason why we need to make full disclosure.”

Meanwhile, Bach said South Korea has removed anti-Japan banners at its accommodation in the Tokyo Olympic Village because they violated IOC guidelines.

The banners, hung on the balconies of competitors’ rooms, spelt out the slogan in Korean: “I still have support from 50 million Korean people.”

The slogan refers to a naval battle during the 1592-1598 Japanese invasions of Korea. The two countries are still engaged in a territorial dispute over an island chain.

Bach said the South Korean delegation had removed the banners at the IOC’s request.

The German men’s Olympic football team left the pitch five minutes before the end of their warm-up game against Honduras on Saturday after defender Jordan Torunarigha was allegedly racially abused.

The game, played behind closed doors in the south Japan prefecture Wakayama, was tied at 1-1 at the time of the incident, which the Honduras national team said was a misunderstanding.

“The game has ended 5 minutes early with the score at 1-1. The Germany players left the pitch after Jordan Torunarigha was racially abused,” the national team said on Twitter.

Britain’s 5,000-metre runner Andrew Butchart will compete in the Tokyo Olympics after UK Athletics handed him a suspended ban for saying he had changed the date on a Covid-19 test result to return to Britain from a meet before clarifying his remarks.

In a now-deleted episode of The Sunday Plodcast, Butchart had said there was a delay in getting his PCR test result before his flight home from the US and he had changed the date on an old test as he prepared for check-in, The Times newspaper had reported.

“Everybody has faked PCR tests to try to go somewhere, because it’s just so hard,” Scot Butchart was quoted as saying in the podcast. The 29-year-old later told the newspaper that he had “perhaps glorified the situation for the podcast”.

He apologised to Team GB and the Tokyo organisers.

“Following widely publicised comments by Andrew Butchart on a podcast regarding the alleged faking of Covid tests, he was charged with misconduct by UK Athletics for making statements likely to bring athletics into disrepute,” UK Athletics said in a statement.

UK Athletics said an independent disciplinary committee had issued Butchart with a 12-month ban from athletics, suspended for a period of two years, and fined him 5,000 pounds ($6,886). It said he can compete in Tokyo.

Butchart had told The Times that he never faked the test and it came through on time.

Brazil’s Olympic Committee said on Friday that heavyweight weightlifter Fernando Reis has been suspended for doping and will not compete at the Tokyo Olympics. He was one of the favourites for a medal in the 105-kilogram category.

The committee said in a statement that 31-year-old Reis did not travel as expected last week after testing positive for a growth hormone.

The athlete is excluded of the delegation that will compete at the Tokyo Olympic Games, the Brazilian committee said.