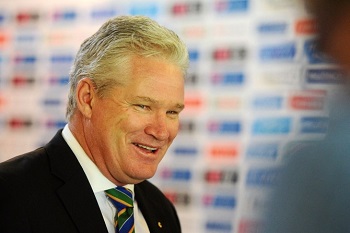 MULTAN: Former Aussie batsman Dean Jones, on Friday said that his team would win the remaining PSL matches by producing a much better performance, who is the head coach of Karachi Kings.

Talking to media persons here at the Multan Cricket Stadium, Jones said that Karachi Kings lost to Multan Sultans because of poor fielding and batting.

“But I assure you that they would give much improve performance in fielding and batting in the next match against Islamabad United,” he said.

Commenting on the Sharjeel Khan’s ordinary performance in the PSL games so far, Jones admitted that the left handed opener was struggling in batting as well as in fielding.

Jones praised the pitch and the ground at the Multan Stadium. “The wicket and the surroundings here were magnificent and both teams enjoyed playing here,” he added.