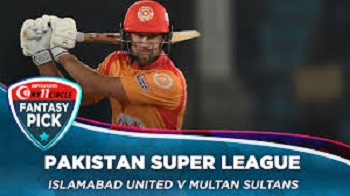 United, who were chasing a target of 165 runs set for them by the Sultans, reached their goal comfortably with 20 balls to spare.

Their two losses were Colin Munro (50 off 32), who was bowled out by Shahid Afridi, and player of the match Ronchi, who stumbled only in the 17th over after taking his side to just runs away from victory with his brilliant 45-ball 74.

Earlier, after being sent in to bat, the Sultans finished with a score of 164-8 at the end of their allotted 20 overs.

The Shan Masood-led team had started off its batting strong, amassing 31 runs at the end of five overs without any losses.

In the sixth over, however, skipper Shan was caught by Muhammad Musa off Faheem Ashraf.

The 10th over brought more trouble for the Sultans, with Amad Butt dismissing both Moeen Ali and Rilee Rossouw. Butt went on to also claim the wickets of JM Vince and Sohail Tanvir.

United earlier won the toss and elected to bowl first against the Sultans. This was the fifth fixture of the fifth edition of PSL.

In the opening match of the tournament, two-time champions United were defeated by Quetta Gladiators by three wickets. Underdogs Sultans, meanwhile, won their encounter with Lahore Qalandars by five wickets on Friday.