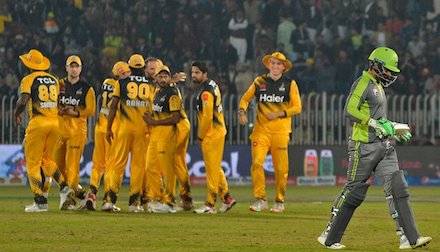 A 10-run victory over Peshawar Zalmi means Qalandars have 10 points from six matches, four points clear of second-placed Karachi Kings, after their second successive win since the coronavirus-disrupted PSL season resumed on Wednesday.

In a game in which the momentum swung wildly, Zalmi were all over Qalandars at one stage before Singaporean David cut loose with a 36-ball 64 not out, alongside fellow power-hitter Ben Dunk who got a quick-fire 48, to help their side post 170-8.A whopping 127 runs came off the final 10 overs.

Rashid then ripped through the Zalmi middle order, picking up 5-20 as they could muster only 160-8 despite a superb rearguard innings by Shoaib Malik, who hit 73 off 48 before clattering his own stumps with his bat to get out hit-wicket

It was a first five-wicket haul for the Afghan, who starred with the bat for his side in their victory over Islamabad United the previous day.

Zalmi captain Wahab Riaz won the toss and his decision to bowl was quickly vindicated with each of Zalmi’s four seamers, including the skipper himself, picking up a wicket each to reduce Qalandars to 25-4.

Fakhar Zaman’s middle stump was uprooted by Wahab in the first over and Qalandars captain Sohail Akhtar followed in the fourth, edging a Mohammad Irfan delivery to Kamran Akmal.

Mohammad Hafeez went in the next over when he hooked a rising delivery from Umaid Asif to David Miller at mid-wicket before Wahab plucked a superb catch to see the end of Mohammad Faizan.

David joined Dunk in the middle and after they laboured to consolidate Qalandars’ innings, the carnage began in the 11th over.

Having already hit a six, Dunk missed out on a half century when he was caught at backward point.

Rashid was out in the 18th over, failing to match his exploits with the bat in Qalandars’ victory over Islamabad United. But his dismissal saw James Faulkner (22) join David and they plundered 44 in the final two overs.

Zalmis’ chase never got going after Faulkner removed both their openers in his first over. He had Kamran Akmal caught at mid-wicket by Haris Rauf and then trapped Haider Ali lbw.

Miller (21) and Malik tried to mount a consolidation effort akin to that by Dunk and David, but the South African became Rashid’s first victim when he chopped a delivery onto his stumps.

Malik continued to battle, but kept running out of partners at the other end. Rashid removed West Indians Rovman Powell (0), Sherfane Rutherford (15) and Allen (0) before cleaning up Wahab (17). The Peshawar side’s hopes well and truly ended with Malik’s dismissal. But Umaid made a valiant attempt to pull off a miracle, clobbering three sixes. However, it turned out to be a case of so near yet so far.