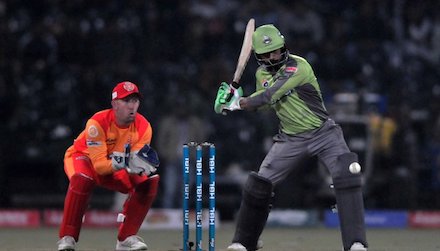 After restricting Islamabad to 143-9 on an outrageously sluggish pitch, Lahore also found runs hard to come by against spinners as they found adequate purchase in the second half of the match to trouble the batters.

At midpoint of the innings, Lahore had managed just 57-2 and needed acceleration to seal only their third win against Islamabad in 11 meetings to become outright leaders at the points table. Wednesday’s victory was Lahore Qalandars’ fourth success in six outings of the ongoing tournament.

Islamabad lost the plot when Hussain Talat was inexplicably entrusted with the final over — and his first of the match — when Lahore still required 16 runs to get over the line. Captain Shadab Khan held himself back at this critical juncture.

Captain Sohail Akhtar (40 off 30 balls, five fours and one six) and Mohammad Hafeez (29 off 25) were the chief run-getters for Lahore, who’ll be again in action on Thursday night when they take on Peshawar Zalmi.

Earlier after being put into bat, Islamabad’s hopes of posting a decent total were dashed by Faulkner. The 31-year-old Australian left-armer —playing his first competitive match since December —marked his HBL PSL debut in great style with a wicket in each of his three overs.

After being bludgeoned for a six by Colin Munro, Faulkner, who finished with 3-32, extracted sweet revenge when the New Zealand opener was cleaned up by a slower ball for 11.

Rohail Nazir (eight) was undone by another slower delivery and offered Fakhar Zaman a simple catch in the covers. Shadab Khan perished for seven when Faulkner dropped his pace sharply to have the Islamabad captain caught by his Lahore counterpart Sohail Akhtar.

Usman Khawaja, the Australian Test star, had dreamt of a memorable debut for the city of his birth. Dropped before scoring on the second ball of the match, the left-handed opener failed to come to terms with the low bounce. Trying to force the pace, Khawaja (18 off 17 balls) sliced a ball from Haris Rauf straight down the lap of Faulkner at third man.

While the middle order failed to break the shackles, Afghanistan’s spin wizard Rashid Khan did not allow anyone to charge at him and conceded just nine runs in his four-over quota, with 15 dot balls.

Faheem Ashraf provided impetus at the death as the left-hander top-scored with a 24-ball 27 before his Pakistan team-mate deceived him with a slower one.

The tournament — which was suspended due to outbreak of coronavirus disease during the first leg in Karachi after 14 matches — resumed after a three-month break after the remaining 20 matches were shifted to Abu Dhabi.