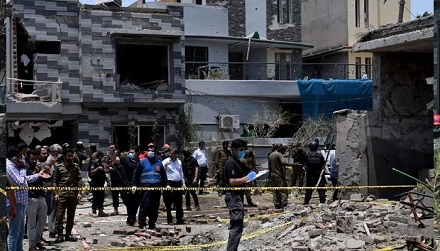 LAHORE: Law enforcement agencies (LEAs) in a breakthrough in the investigation into Wednesday’s bomb blast case, arrested a suspect said to be a foreign national from the Lahore airport.

Identified as Peter Paul David, the suspect was offloaded from a Karachi-bound flight and shifted to an undisclosed location for interrogation. He is said to be the owner of the car used in the blast on Wednesday near the residence of Jamaatud Dawa chief Hafiz Saeed that killed three people and injured 24 others.

The LEAs were also on the lookout for another suspect who is said to have driven the explosives-laden car to the targeted location while dodging law enforcers.

Details about the identity and whereabouts of the arrested suspect are being withheld. David’s travel history showed that he had been shuttling between Karachi, Lahore and Dubai frequently, while he couldn’t satisfy the investigators about the purpose of these visits and his activities.

Since being stolen in 2010 from Gujranwala, the car used in the blast had been sold further multiple times and David was its last owner, according to initial investigations.

The bomb blast near the residence of the JuD chief has also sparked off debates on the intelligence failure of the Counter-Terrorism Department. CTD chief Wasim Sial also faced criticism in a high-profile meeting on Thursday when it transpired that the terrorists prepared the explosives-laden car in Lahore and transported it near the high-value target’s residence in Johar Town.

The CTD housed an intelligence wing to detect terrorist networks and counter and pre-empt their activities.

An official said intelligence agencies traced the location of the owner of the car through its registration record obtained from the excise department, and then arrested David from the Lahore airport.

Quoting initial investigations, the official said the car entered Lahore from Babu Sabu interchange a few hours before the blast where police personnel cleared the vehicle and the driver after checking.

He added that there were conflicting reports about whether it was carrying explosives at the time or not. However, there was a strong possibility that it was fitted with explosives inside Lahore and then driven to Johar Town.

CCTV footage showed a masked suspect parking the car at the corner of a street near the residence of the JuD chief around 10:40am on Wednesday. He got out of the car and then disappeared, the official said, adding that the blast occurred around 11:10am. Reportedly, the suspect had carried out the blast with a timed-device.

Footage later showed that the driver was picked up from a petrol pump nearby by an accomplice in a car and they drove off, the official said.

He added that during interrogation, David denied his involvement in the blast. He told the investigators that during his last visit to Dubai, a friend of his said someone he (the friend) knew in Gujranwala needed his (David’s) car for a couple of days. When he returned to Pakistan, he handed over the car to a masked man in Gujranwala, David said, adding that he thought the man was wearing the mask because of Covid.