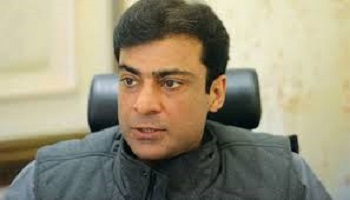 LAHORE: The Lahore High Court on Tuesday turned down a bail petition filed by Pakistan Muslim League-Nawaz (PML-N) leader Hamza Shehbaz in a money laundering and assets-beyond-means case against him, a private TV channel reported.

On February 6, the LHC had granted Hamza Shehbaz bail in the Ramzan Sugar Mills case. He had been indicted in the sugar mills case, along with his father Shehbaz Sharif, on April 9 last year.

On April 17, 2019, Hamza was granted pre-arrest bail by the LHC, which also restrained NAB from arresting him in cases pertaining to ownership of assets beyond means until further notice. Hamza was also directed to submit bail bonds worth Rs10 million at the time. The PML-N leader was arrested by NAB from inside the LHC on June 11 in the Ramzan Sugar Mills and money laundering cases after the two-member LHC bench cancelled Hamza’s bail.

A two-member bench presided by Justice Mazahar Ali Akbar Naqvi heard the petition. During the hearing, the court remarked that Hamza has failed to give satisfactory answers regarding his sources of income.

The court remarked that if it accepts the applicant’s point of view, the anti-money laundering law will be rendered completely redundant.

During the arguments, the court noted that Hamza’s father, former chief minister Punjab Shehbaz Sharif, was a three-time public office holder, to which Hamza replied that he himself was not once in any such position.

Hamza’s lawyer contended that every detail had been provided in the accused’s income tax returns.