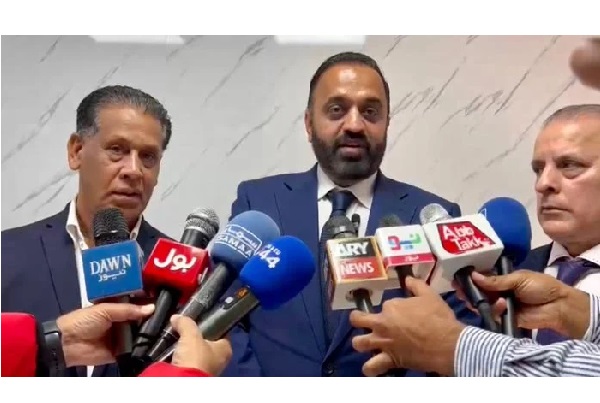 ISLAMABAD: The joint investigation team (JIT) constituted to probe into Arshad Sharif’s killing in Kenya is scheduled to record on Wednesday (today) the statement of the man who accused former prime minister Nawaz Sharif of being part of the plot to murder the journalist and the assassination attempt on former prime minister Imran Khan.

Over a week ago, UK-based Syed Tasneem Haider Shah had in a press conference claimed to be a spokesman for the PML-N’s London chapter and made these allegations. He had claimed he was part of the meetings, which were also attended by the PML-N supremo, where plans for the two ‘murders’ were discussed.

Sharif was shot dead in Kenya on Oct 24. Initially, the Kenyan media quoted the local police as saying he had been shot dead in a case of “mistaken identity”. But later, conflicting reports around the events that led to the murder started trickling in from both the local and Kenyan media. The government subsequently formed a team that travelled to Nairobi to investigate the incident.

The JIT also informed the Supreme Court on Tuesday that the preliminary report on Sharif’s killing would be filed by next week.

In response to the summons issued to Shah for recording his statement, his counsel informed the JIT that owing to the threats to his client’s life, Shah was unable to appear in person. The lawyer however informed the team through an email that Shah was willing to testify through a video link. Subsequently, the JIT is scheduled to record the statement on Wednesday (today).

The two-member team — comprising Federal Investigation Agency (FIA) Director Athar Wahid and Intelligence Bureau Deputy Director General Omar Shahid Hamid — had a week ago summoned Shah to appear before the agency on Tuesday to provide evidence that he claimed to have linking Nawaz to the attacks on Arshad Sharif and Imran Khan.

Shah was contacted after he had claimed in a press conference that Arshad Sharif’s mobile phone and laptop had reached London and were in the possession of PML-N UK Senior Vice President Nasir Butt. He further claimed Mr Butt had links with Waqar Ahmad and Khurram Ahmad — the brothers who reportedly hosted Sharif in Nairobi and sponsored his visa to Kenya on the request of Mr Tariq Wasi, the chief of Karachi Kings cricket team and the head of operations of ARY News. He claimed Mr Butt had told him about these links.

Meanwhile, the sources said the JIT, in response to a query of the Human Rights Cell (HRC) of the Supreme Court, stated that the preliminary fact-finding report would be ready and submitted to the court by next week.

The sources said the report would also highlight the issues and lack of cooperation from relevant quarters.

The investigators are seeking from the Pakistani consulate a copy of the visa and other travel documents issued to Arshad Sharif; identification of the place where he stayed in Dubai from Aug 10 to 20; any CCTV footage of the premises; mapping of his movement in Dubai; information regarding the people he might have met during his stay; clarification over whether Sharif’s visa was canceled and if so, any reasons why; call data record (CDR) of his phone, which as per information, was in use during his stay; data on the arrivals and departures of Pakistani passport-holders from Aug 10 to 20; CDR of the phone numbers of ARY News CEO Salman Iqbal and Mr Wasi.