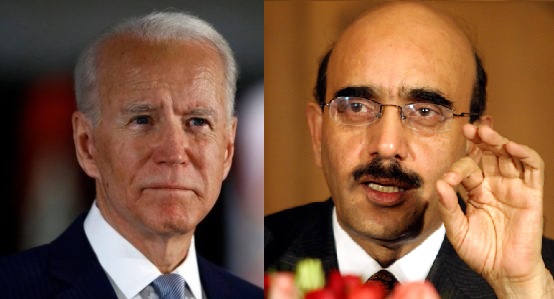 In a statement issued in Muzaffarabad, he said Biden’s remarks are a proof that world community had refused to buy the Indian narrative on the Kashmir.

Democratic Party leader Joe Biden has asked Delhi to take all necessary steps to restore rights of all the people of Kashmir and asserted that restrictions on dissent, such as preventing peaceful protests or shutting or slowing down the Internet, weakens democracy.

Biden also expressed disappointment over the Citizenship (Amendment) Act and the enforcement of the NRC in different states of India.

Earlier addressing a function held in connection with the disbursement of cash grant among the affectees of Indian shelling living along the Line of Control, AJK President said that relief being provided by the federal government to 610,000 members of 80,000 families living is the recognition of their sacrifices as well as acknowledgement of the responsibilities being shouldered by the state government.