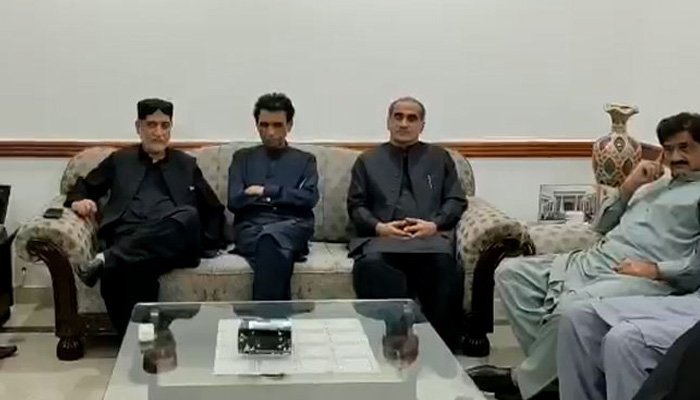 ISLAMABAD: The Muttahida Qaumi Movement-Pakistan (MQM-P), a key ally of the Pakistan Tehreek-i-Insaf-led coalition government, formally announced on Wednesday that it was joining the opposition ranks ahead of a no-trust vote against Prime Minister Imran Khan.

With MQM-P's weight behind the joint opposition, PM Imran will lose his majority in the National Assembly and if the situation remains the same till voting on the no-trust resolution, which is expected to take place on April 3, his ouster is all but certain.

MQM-P's announcement was made by party convener Khalid Maqbool Siddiqui at a press conference in Islamabad alongside leaders of the joint opposition.

"We have gathered at a historic moment. More than congratulations, this is a test through which the national leadership has to pass," Siddiqui said. "Today is also a day for prayers ... common people's wishes have been fulfilled. I expect that this time we can [strive for] a democracy whose effects can reach the common people of Pakistan.

"We have joined you (the opposition) on this journey with these expectations. We have no individual or party benefits. Every clause of our agreement is for the common public of Pakistan and especially for those areas whom we have been representing for the last 35 years. The areas for which we believe immediate steps are needed."

"We have prioritised Pakistan's interests over all individual interests," he added.

Following Maqbool's announcement, Leader of the Opposition in the National Assembly Shahbaz Sharif said: "Today is an important day in Pakistan's history because a joint opposition ... a national jirga of the opposition ... has come together and efforts have been made for national unity.

"I want to thank MQM-P and its workers who kept the wishes of the 220 million people of Pakistan [at heart] and made this decision. I am especially thankful to Asif Ali Zardari and Bilawal that through this whole process of negotiations, they kept the history aside. They have initiated this journey of Pakistan's prosperity and Karachi's happiness."

"This agreement will be implemented in letter and spirit," the PML-N leader added.

PPP leader Bilawal also thanks MQM-P and described its decision of teaming up with the opposition as "historic".

"I want to repeat that PPP and MQM-P's working relationship is not related to the no-confidence motion. PPP and MQM-P have to work together under any condition, if we want to work for Karachi and Pakistan's prosperity," he said.

"Imran Khan has now lost his majority. He is not the prime minister anymore. The parliament session is tomorrow. Let's hold voting tomorrow and settle this matter. We can then start working on transparent elections and the journey towards restoration of democracy and an end to economic crisis can then begin."

Jamiat Ulema-i-Islam-Fazl (JUI-F) chief Maulana Fazlur Rehman also welcomed MQM-P's decision, saying: "This decision is an expression of national unity for not only Karachi and Sindh but the whole of Pakistan.

"As a result of these decisions (government allies joining the opposition), our strength in the National Assembly now stands at 176 while we need only 172," he added.

Following the formal announcement, MQM-P's Siddiqui signed a pair of agreements — one with Bilawal over promises related to Sindh and another with PML-N's Ahsan Iqbal over commitments regarding the federation.

Earlier in the day, MQM-P's coordination committee announced that it had ratified the agreement between the party and the opposition on the no-confidence motion against Prime Minister Imran Khan.

MQM-P leader Nasreen Jalil confirmed the development while speaking to the media outside the party's markaz in Karachi's Bahadurabad.

"Details of the agreement will be revealed in a press conference at 4pm," she said. In that press conference, the party is expected to formally make public its split with the government and announce voting in favour of the no-trust resolution against PM Imran.

Naseem, who was the federal minister for law, wrote in his resignation letter, a copy of which is available with Dawn.com, that he was resigning on the directions of MQM-P convener Khalid Maqbool Siddiqui.

Minister for information technology and telecom, Haque, wrote in his resignation letter that while he was a part of the government in his capacity as a minister, he was "bound by my party's decisions as a responsible worker".

"In light of my party MQM-P's decisions, I resign as federal minister for information technology and telecommunication. I request you (the prime minister) to accept this."

He added that he was "proud of fulfilling my duties with honesty". He iterated the same in a video message shared shortly afterwards.

"MQM-P called a meeting of its coordination committee, chaired by [MQM-P convener] Khalid Maqbool Siddiqui, that ratified the agreement with the [opposition] and the resignation of the ministers. A new phase will begin and we will make efforts to struggle for urban Sindh's progress," Haque said in another video message.

The party held a late night meeting with opposition leaders on Tuesday which created quite a stir in the capital and had many anxiously checking their TVs for updates.

They held talks with MQM convener Dr Khalid Maqbool Siddiqui and other leaders, which continued well into the early hours of Wednesday.

Later, the main cohort of opposition leaders — Asif Ali Zardari and his son Bilawal, Maulana Fazlur Rehman and Shehbaz Sharif — also reached the venue around 2:00am in a bid to persuade the government ally to switch sides.

While the combined opposition tried with all its might to prevail upon the party to announce a decision there and then, the MQM-P avoided making a definitive statement at such a late hour and announced that it would make its decision public the next day.

In a tweet early on Wednesday, MQM-P Senator Faisal Subzwari said that an agreement between the party and the united opposition had been finalised.

"The PPP's central executive committee and the MQM-P's coordination committee will ratify the agreement," he said, adding that the details would be announced during a 4pm press conference on Wednesday.

The same was also confirmed by PPP Chairman Bilawal Bhutto-Zardari.

"The united opposition and MQM have reached an agreement. Rabta committee MQM and PPP CEC will ratify said agreement. We will then share details with the media in a press conference tomorrow. Congratulations Pakistan," he said.

Sources privy to the meeting said that the sitting discussed certain clauses about a future agreement between the PPP and MQM-P regarding Sindh’s administrative and local government issues in the presence of the senior leadership of other opposition parties.

The draft agreement is not only with the PPP, but with the whole opposition, a source said, adding that Maulana Fazlur Rehman and Shehbaz would ensure implementation on the agreement if it was approved by the coordination committee.

The MQM-P, which has seven members in the National Assembly, is a key ally of the PTI government and its decision in the ongoing political scenario will decide whether PM Imran's government will survive the no-trust vote, which is expected to take place on April 3.

On Monday, PML-Q had finally put its weight behind the embattled prime minister in exchange for PM Imran conceding Chaudhry Pervaiz Elahi as PTI's candidate for Punjab chief minister after incumbent Usman Buzdar presented his resignation to the premier.

The PML-Q is also a critical ally of the PTI government in Punjab and Centre, with 10 and five seats, respectively. The Chaudhrys support to PM Imran was being seen as a revival of his hopes to save his government.

Excluding MQM-P's votes, the joint opposition had managed to accumulate the support of 169 MNAs, three short of the magical figure of 172 needed to gain a majority in the National Assembly and remove Imran Khan as the prime minister.

At the same time, a government delegation also met with the MQM-P at Parliament Lodges last night to try to dissuade the party from joining the opposition ranks.

Talking to media, Sindh Governor Imran Ismail said that the prime minister's message had been conveyed to Khalid Maqbool Siddiqui and his people. "We are expecting an announcement tomorrow (Wednesday) morning."

Ismail said that the government had tried to resolve the party's reservations and was, in a way, successful in the endeavour. "As far as an offer is concerned, we had earlier offered them a ministry [...]. Even if they want something more, we will give it to them."

He added that the government's doors and hearts were open for the party. "We will adjust things in whatever way they want."

However, it appeared that the government was not done negotiating with the MQM-P. In a tweet on Wednesday, PTI leader Faisal Vawda said he had returned to Islamabad from Karachi on the prime minister's directions.