Muslims in India at heightened risk of social exclusion: FO 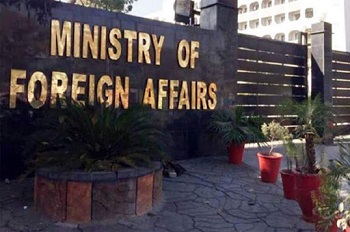 ISLAMABAD: The Foreign Office said on Thursday that Muslims in India were at heightened risk of social exclusion and violence after being blamed for the spread of the coronavirus.

“It is deeply disconcerting that the discriminatory and anti-Muslim policies and practices of the RSS-inspired BJP government persist even as the Covid-19 pandemic unfolds. A systematic campaign is unfortunately under way to demonise Muslims, who face increased exclusion as well as the threat of mob violence,” FO spokesperson Aisha Farooqui said during the weekly media briefing.

Muslims in India are being scapegoated for the spread of coronavirus. This anti-Muslim propaganda, which has been encouraged by the ruling BJP and fuelled by Indian TV channels, has further widened the gulf between India’s Muslim minority and Hindu majority. It all started after the spread of the disease in India was linked to a Tableeghi Jamaat gathering in Delhi in March.

There have been sporadic incidents of violence against the Muslim community, but expression of hatred against the Muslims has become more pronounced. Hospitals have refused to treat Muslim patients, neighbourhoods have discussed stopping Muslims from entering them and people have been removed from jobs.

The Muslims increasingly faced discrimination and violence since Prime Minister Narendra Modi came to power in 2014. Some of anti-Muslim actions enjoyed backing of the state, which particularly emboldened Hindu zealots. The situation aggravated during Mr Modi’s second term when the government took several anti-Muslim steps, adding to the marginalisation of India’s 200 million Muslim community, including the annexation of occupied Kashmir, enactment of controversial Citizen­ship Amendment Act, finalisation of National Register of Citizens in Assam and plans for implementing it throughout the country.

“These instances have been extensively documented in the Indian and international media and people of conscience worldwide are raising their voices,” Ms Farooqui said.

She warned that the anti-Muslim actions would have “real consequences” for the Muslims of India.

“The treatment of minorities in India is a matter of serious concern not only for Indian minorities and neighbouring countries but also for the international community,” she added.

She recalled the Organisation of Islamic Cooperation’s statement expressing “deep concern” over rising anti-Muslim sentiments and Islamophobia in India.

The spokesperson also expressed concern over persecution of journalists in India-occupied Kashmir, including Masarrat Zahra, Peerzada Ashiq and Gowhar Geelani, on concocted and baseless charges.

Police in occupied Kashmir summoned and questioned Mr Ashiq about an article on families of slain freedom fighters getting their bodies exhumed for final rites.

Ms Zahra was called by cyber police for interrogation about her posts on social media and Mr Geelani was accused of glorifying terrorism.

Ms Farooqui said that Indian forces in the past few days had martyred eight Kashmiri civilians during their so-called ‘cordon and search operation’ in the valley. She said Indian forces used “excessive force” against “unarmed civilians”.

She emphasised that Kashmir was a disputed territory, therefore any killing, use of brute force, arrests of people and blocking of communication services and internet constituted violation of international law.