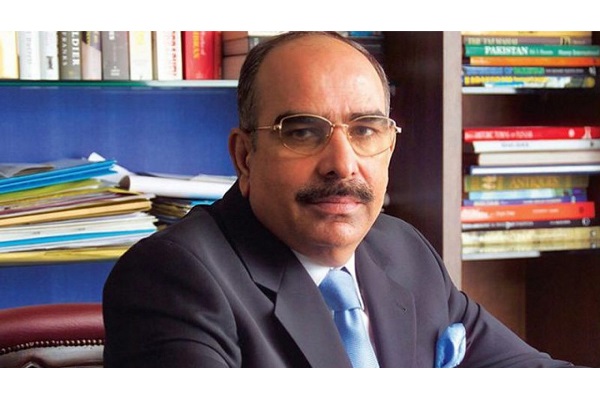 ISLAMABAD: The National Accountability Bureau (NAB) has asked Mr Malik Riaz and other beneficiaries to appear before it on Dec 1 in a case related to a 190 million pound (Rs50 billion) settlement.

According to a NAB letter, Bahria Town owner Malik Riaz was asked to appear before a combined investigation team of the anti-corruption watchdog at 11am on Dec 1 at the bureau’s Rawalpindi headquarters.

“Call-up notice to the persons acquainted with facts of the case under section 19 of the National Accountability Ordinance-1999, inquiry against holders of public office and others qua misuse of authority, financial gains and criminal breach of trust in recovery of crime proceeds received from the UK and illegal sealing of its record,” the notice said.

It said the inquiry into allegations of misuse of authority, financial gains and criminal breach of trust had revealed that Ali Riaz Malik and others entered into an out-of-court settlement agreement with Britain’s National Crime Agency for repatriation of funds to the government of Pakistan.

Malik Riaz has been asked to come up with complete record regarding purchase of 458 kanals at Tehsil Sohawa, the agreement through which Bahria Town donated land to Al Qadir Trust along with revenue documents, and details of other property transferred by him, or by any of his relatives, in favour of Al Qadir Trust or any of its trustees.

According to unconfirmed reports, Imran Khan’s wife is one of the trustees of the trust. “You are advised that failing to comply with this notice may entail penal consequences under NAO 1999,” the real estate tycoon was warned.

In June this year, Interior Minister Rana Sanaullah had unveiled a confidential agreement entered between the NCA and members of Malik Riaz’s family (“the counter parties”).

He had accused Imran Khan and his wife of accepting Rs5bn and hundreds of kanals of land from Bahria Town for protecting the real estate firm in a money laundering case.

In December 2019, the NCA had accepted a settlement offer of £190 million, which included a UK property — 1 Hyde Park Place, London, W2 2LH. It was valued at approximately £50 million and all of the funds landed in the frozen accounts of Malik Riaz.

The NCA has been granted freezing orders on eight bank accounts containing a total of more than £100 million, which is suspected to have been derived from bribery and corruption overseas. Approximately, £20m held by a related individual was frozen following a hearing in December 2018.

In March that year, a three-judge Supreme Court bench, headed by Justice Sheikh Azmat Saeed, had accepted a Rs460bn offer by Bahria Town to implement the court’s judgement which held that grant of land to the Malir Development Authority by the Sindh government, its exchange with the developer’s private land and anything done under the provisions of the Colonisation of Government Land Act of 1912 by the provincial government were illegal and of no legal existence.

Later, former prime minister Imran Khan and his wife were accused of accepting billions in cash and hundreds of kanals of land from Bahria Town in return for the help that Khan’s government gave to Malik Riaz during the NCA investigation against him.

Interior Minister Sanaullah had claimed that Imran’s aide Shehzad Akbar had “settled” the entire case, while the Rs50bn, which belonged to the national exchequer, was adjusted against Bahria Town’s liability.

He alleged that Imran Khan had received a bribe of Rs5bn as “his share” through Shehzad Akbar before the case was wrapped up.

He further said that Bahria Town, after its Rs50 billion was protected by the then PTI government, had allotted 458 kanals of land with an on-paper value of Rs530 million to a trust owned by Imran and his wife.

He further said another 240 kanals were transferred to Farah Shehzadi, commonly known as Farah and believed to be a close friend of Mr Khan’s wife Bushra Bibi.

It is these 458 kanals that have now come under the scrutiny of the accountability bureau.

In the Nov 24 call-up notice served on Malik Riaz, he has been asked to record his statement regarding purchase of 458 kanals of land at Mauza Barkala, Tehsil Sohawa, Jhelum district.