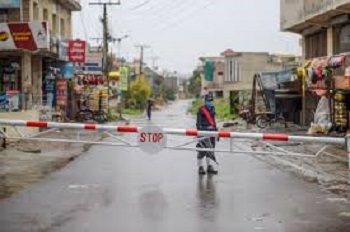 ISLAMABAD: The National Coordination Committee (NCC) Tuesday (today) may announce an extension in the nationwide lockdown to another 14 days on the recommendation of Sindh Chief Syed Murad Ali Shah who said the economy was revivable but not the dead humans.

Shah attended the National Coordination Committee (NCC) meeting chaired by Prime Minister Imran Khan through a video link and briefed it on the seriousness of the situation in Sindh, media reports say.

Prime Minister Imran Khan will announce the post-April 14 way forward today as chair of the National Coordination Committee (NCC), which will meet with the participation of chief ministers of all the provinces and Gilgit-Baltistan, as well as the prime minister of Azad Jammu and Kashmir.

Shah asked the federal government to give a clear stance on the future policies adding there should be a unified national policy to counter the current situation and all decisions should be coming from the PM himself.

He suggested that theprime minister should announce his decisions on Tuesday (today) which would be followed by the provinces to the letter. He said in case of no extension in the lockdown, the decision should come from the PM so that there was clarity about the situation.

“Whichever sectors are to be reopened, their SOPs should be provided to all the provincial governments,” he added. He also advised the federal government to acquire assurances from the people receiving financial assistance to self-isolate themselves for 14 days.

Meanwhile, the Interior Ministry Monday extended the closure of all the borders to another two weeks in order to control the spread of COVID-19. “As per the decision of National Coordination Committee, the interior ministry has decided to extend closure of all borders of the country to further two weeks,” said a notification issued by the ministry.