No ban on daily and Friday prayers: AJK govt 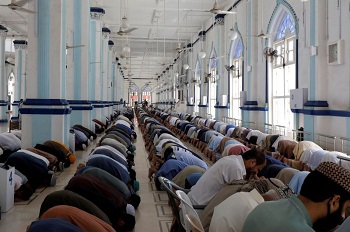 MUZAFFARABAD: The AJK government has decided that there shall not be a ban on daily and Friday prayers as well as Taraweeh. The decision was announced after Prime Minister Raja Farooq Haider held a meeting with religious scholars and prayer leaders.

During the meeting, the prime minister announced to lift the restrictions on assembly of more than five worshipers in mosques.

Information technology minister Dr Mustafa Bashir Abbasi said the prayer leaders and religious scholars will have to ensure precautionary measures, including removal of carpets for a certain period, disinfection sprays five times a day and a three-foot gap between each faithful who should be wearing masks.

In response to a question, Mr Abbasi said since the federal government was about to allow return of stranded Pakistanis and Kashmiris from different countries in next few days, the AJK government had prepared a plan for transportation of the AJK citizens.