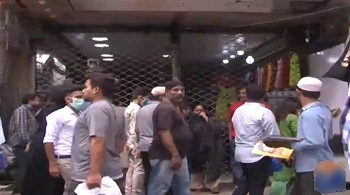 KARACHI: Commissioner Karachi Iftikhar Shallwani on Wednesday ordered the sealing of a number of major markets and shopping centres and at least three stores in the city for violating the standard operating procedures (SOPs) issued by the government before easing the coronavirus lockdown for traders and the public.

In the East district of the city, three major stores Limelight, Shoe Planet and Stylo were sealed for allowing large crowds inside the shops.

At least two beauty salons were also sealed in the district for not following the guidelines.

"These shops have been sealed as they were violating the SOPs despite warnings and my personal visits to all these markets," the commissioner said in a statement.

He warned that the businesses of shopkeepers who do not implement the government-mandated SOPs will be sealed.

Markets across the country were seen teeming after opening up on Monday for the first time in over a month as the nationwide lockdown was eased despite a steep rise in the number of Covid-19 infections.

The government announced last week that it would begin a phased lifting of the lockdown because of the effect it was having on the economy and the workforce.

Areas around wholesale markets in Karachi saw heavy traffic jams, and there were also big crowds in the commercial centres of Lahore and Quetta.

In numerous places, many people were seen not observing the government-issued guidelines to prevent further spread of Covid-19, including by not wearing masks and not maintaining a physical distance.

On Tuesday, speakers at a press conference in Karachi had expressed serious concerns over the irresponsible conduct of citizens following relaxation in the lockdown and described it as “a public health disaster in the making”.

“Yesterday, after relaxation of the lockdown, we noted with horror that most people on streets, shopkeepers and salesmen, and even policemen and journalists were either not wearing face masks at all or not using it properly. We also saw people with three to four children travelling on bikes and in rickshaws without any precaution,” said Dr Shershah Syed, a senior physician-cum-activist.

They also criticised the federal government for its “lack of understanding” in containing the spread of Covid-19.