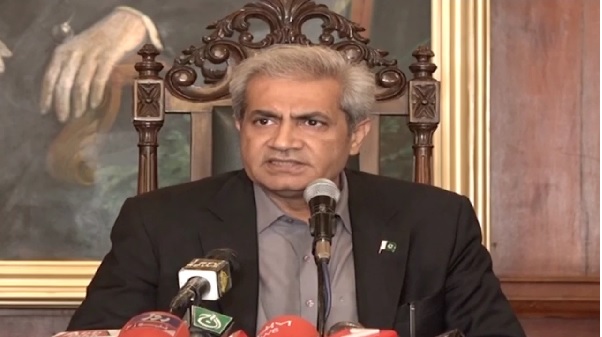 ISLAMABAD: Former Punjab Governor Omar Sarfraz Cheema threatened the government on Wednesday that a 2007-like “save judiciary movement” could be launched against his “illegal removal” from office earlier this week.

Addressing a press conference on Wednesday, Mr Cheema described the present rulers as a “Sicilian Mafia” and said they should not be allowed to appoint the next army chief.

“In case no solution is proposed to end the prevailing crisis in Punjab, we will go for a protest campaign like 2007 when the whole nation had taken to the streets,” he said.

“I am consulting different groups, including the lawyers’ community, media and civil society, to launch a similar movement under which former chief justice Iftikhar Chaudhry was restored in 2007,” he added.

Mr Cheema said he would not sit idle like former chief minister Usman Buzdar and would resist all attempts to remove him.

Earlier this week, the federal government, in a late-night announcement, notified that Mr Cheema had ceased to hold office as the Punjab governor on the advice of the prime minister sent to the president on April 17 and reinforced on May 1.

In his presser on Wednesday, Mr Cheema claimed that he was still the Punjab governor and thanked President Alvi for continuously supporting him.

“Though my security, vehicles and other facilities have been withdrawn, I am still the governor and want to clarify that I will not quit as [former] CM Punjab Usman Buzdar did,” he added.

Soon after the cabinet division’s notification in the wee hours of Tuesday, security and official vehicles of Mr Cheema were withdrawn and he was barred from entering Governor House.

He said he had been writing letters to the quarters concerned for the last 37 days, informing the nation that Pakistan Muslim League-Nawaz (PML-N) government in the centre had thrown the country’s biggest province into crisis.

He even claimed that Pakistan Tehreek-i-Insaf (PTI) leader Usman Buzdar was still chief minister of the province as his resignation was accepted “unconstitutionally”.

“Former governor Punjab Chaudhry Sarwar had accepted his resignation in haste because the governor had already joined the PML-N’s camp,” he said.

The acceptance of Mr Buzdar’s resignation by Mr Sarwar was challenged in the Lahore High Court (LHC) on April 20, but the court rejected the petition. “Punjab has two chief ministers these days,” Mr Cheema claimed.

Mr Cheema said PML-N lawyers had misled the court over the issue of oath-taking of incumbent Chief Minister Punjab Hamza Shehbaz and urged bar councils to act against these lawyers.

He said after his security was withdrawn, he asked Interior Minister Rana Sanaullah for security guards of Rangers or Frontier Constabulary, but his request was turned down.