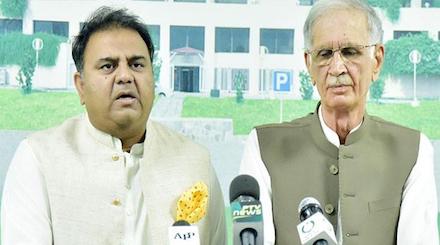 ISLAMABAD: Government members and Opposition parties reached an agreement on Thursday that they would ensure smooth proceedings of the house and, on the opposition’s demand, the passage of 21 bills “in haste” last week would be reviewed by a committee formed by Speaker Asad Qaiser.

“It is a welcome development that the government and opposition have reached an agreement and from now onwards the parliamentary proceeding will be carried out smoothly,” Minister for Information and Broadcasting Chaudhry Fawad Hussain, accompanied by Defence Minister Pervaiz Khattak, told media after a meeting between Pakistan Tehreek-i-Insaf (PTI) and opposition delegations at the Parliament House.

Mr Fawad said the parliamentary teams of the PTI and the opposition held a discussion on the unpleasant environment in the National Assembly and admitted that it had brought embarrassment to the house.

The information minister said the meeting proposed formation of a parliamentary committee, comprising members from both treasury and opposition benches, that would be responsible for the conduct of their respective members in the house.

The meeting, he said, agreed that no individual would be targeted and insulted during the budget speeches of parliamentarians from the both treasury and opposition benches.

Till formation of the committee, he said, the leadership of the parliamentary parties would ensure that their respective members practice parliamentary norms in the National Assembly.

Mr Fawad said the committee would also look into the possibilities of increasing the powers of the speaker.

He said the government team had requested the opposition to withdraw the no-confidence motion it had submitted against Deputy Speaker Suri, expressing the hope that there would be a positive response.

Speaker Qaiser said, in a press talk and on the floor of the National Assembly, that the government and the opposition had agreed that they would ensure smooth proceedings of the house and would not disrupt speeches of each other.

The speaker admitted that the NA had passed 21 bills on June 10, a day before announcement of the federal budget, in haste and therefore the opposition had moved a no-confidence motion against the deputy speaker.

The government on June 10 literally bulldozed legislation in the National Assembly by getting 21 bills approved, including the controversial Elections (Amendment) Bill 2020 and the bill to provide right of appeal to Indian spy Kulbhushan Jadhav, after suspending the rules of business amid the opposition’s strong protest and boycott.

The government-opposition confrontation, that lasted for over a week became unprecedented on June 15 when members of treasury and opposition benches hurled heavy budget books at each other turning the house into a battlefield. Some of them were injured during the clash.

Speaker Qaisar said he had formed a parliamentary committee to revisit the bills passed on June 10 after which the opposition had withdrawn the motion against Mr Suri.

He said it had been agreed during the government-opposition meeting that there would no “uncivilised and unlawful” protest in the house and that there would be no disturbance during speeches of the leader of the house (Prime Minister Imran Khan), Leader of the Opposition Shehbaz Sharif and the leaders of the parliamentary parties. He said it had also been agreed that no member would use non-parliamentary language during their speeches.

PML-N leader Rana Sanaullah, while speaking on the floor of the house, confirmed that he was in the opposition’s team during talks with the government at the speaker’s chamber. “It has been decided in the meeting that both sides of the NA will ensure peaceful environment in the house,” he said.

PPP leader and former prime minister Raja Pervez Ashraf said it was good that the speaker had realised that 21 bills had been passed in haste. “Now a parliamentary committee has been formed and we hope that no legislations will be made in haste in future,” he added.

Speaker Qaisar said maintaining decorum during the proceedings of the house was collective responsibility of both treasury and opposition benches. “Members of the National Assembly being public representatives are required to uphold moral values as people follow them,” he added.

He said that he had telephonically discussed the situation with Shehbaz Sharif and PPP Chairman Bilawal Bhutto-Zardari to normalise the tense environment in the house.

It has been learnt that the speaker has withdrawn suspension of seven members who are said to have been vigorously involved in fighting against each other in the house on Tuesday.

Earlier, Defence Minister Pervaiz Khattak chaired a meeting of the parliamentary committee of the PTI and its allied parties, during which 186 members expressed confidence in the NA speaker and deputy speaker.