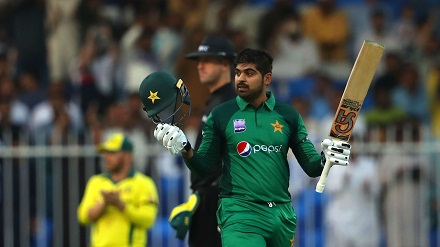 Left-handed batsman Haris Sohail may have to miss out on the first ODI between Pakistan and England as he still continues to feel pain in his right leg, Geo News reported Monday.

Sohail will not take part in the national team's two practice sessions scheduled on July 5 and 6 in Derby, due to the injury. Last week, Sohail had missed out on the intra-squad practice matches due to the same injury.

The left-handed batsman has already started his rehabilitation and will undergo an MRI scan on July 6 in Cardiff, following which a decision on his availability for the July 8 ODI against England will be made.

The three-match ODI series between Pakistan and England, which is also part of the ICC Men’s Cricket World Cup Super League, will commence from Cardiff on July 8.

Pakistan team is scheduled to travel to Cardiff on July 6.

The Pakistan team has already reached England to play a T20I and ODI series and had remained in isolation in Derby after which they had started their training.

Pakistan captain Babar Azam had said that the England series would be helpful in the team's preparation for the World Cup and warned that England is not an easy opponent.

Skipper Azam said Pakistan's performance in the previous tours had been good, however, he warned of any complacency.

"The English team will not be an easy opponent on their home ground. This is a good opportunity for World Cup preparation."