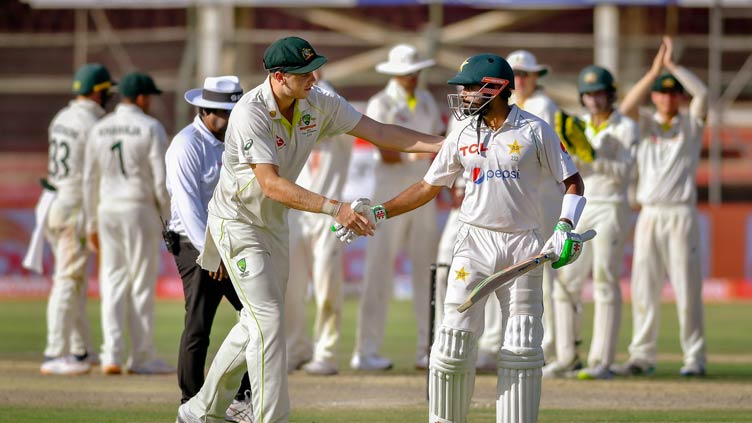 KARACHI: Australia draw the match on the final day of the second Test at the National Stadium in Karachi on Wednesday as a resilient Pakistan saved the mach from defeat.

After two matches, the series still remains even but the result of the second Test must have felt a moral win for Pakistan, who at one point on the penultimate day were reeling at 21 for 2 in pursuit of a gargantuan 506-run target with a sea of overs left to survive.

Pakistan's best bet on the final day was to bat out their overs and Babar led by example as they finished on 443-7, the sixth highest fourth innings total of all time.

Babar's majestic knock, which included 21 fours and a six, will be an inspiration for his team heading into the third and final test in Lahore on Monday.

“The plan was to bat session-by-session and build partnerships,” the Pakistan captain, who was adjudged player-of-the-match said at the presentation ceremony.

“It was a team effort, as others chipped in with useful contributions too.” “We tried to be positive and play our shots. The team needed this knock, so I tried to bat for as long as I could.”

The hosts were on the back foot after folding for 148 in reply to Australia's massive first innings total of 556-9 at the National Stadium.

The record victory target was never within Pakistan's reach but Babar's marathon 228-run partnership with opener Abdullah Shafique (96) kept them afloat in the contest.

“I'm just really proud of the efforts,” Cummins said after Australia were stranded three wickets away from victory.

“The way we batted was fantastic, the way we hunted we took those wickets on day three with reverse swing, that was brilliant as well.

“We were always ahead in the game, so really proud of the boys,” added Cummins.