Pakistan beat Afghanistan to reach semifinal of Under 19 World Cup 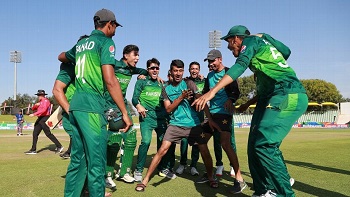 SOUTH AFRICA: Pakistan on Friday beat Afghanistan to reach the semifinal stage of the Under 19 World Cup 2020. The young guns successfully chased down the 190-run target posted by Afghanistan in 41.1 overs, losing just four wickets in the process.

This win sets Pakistan up for a semi-final clash against defending champions India. Afghanistan, on the other hand, will take on Australia for the fifth-place playoff.

Afghanistan — who had won the toss and opted to bat first — were bowled out for 189. While the team had begun their inning well — posting 41 runs for no loss, the batting crumbled after the first wicket fell and the team soon stood at 99 for 4. It was Abdul Rahman, who came in to bat at the 9th spot who gave the team some stability by pitching in 30 runs to the team's total.
Article continues after ad

Pakistani's young Mohammad Amir was the star bowler for the team today, taking 3 wickets. Fahad Munir took 2 for 29 in his seven overs.

In the Pakistan inning, Haider Ali was the first man dismissed — run out in the 12th over — but the damage had been done as the team has posted 61 runs on the board already.

Captain Rohail Nazir then made 22 runs as he accompanied today's star Mohammad Huraira, who scored 64 runs. Huraira hit eight fours and a six during the knock, before he was run out by Afghanistan's Noor Ahmed.