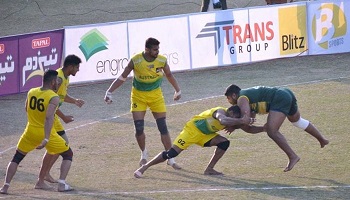 LAHORE: Pakistan won against Australia side 62-25 on Thursday to qualify for the Kabaddi World Cup semi-finals at the Iqbal Stadium in Faisalabad.

In pool ‘A’, India grabbed top spot after defeating Iran 50-39 and confirmed their place in the last-four stage.

Iran and Australia are the other two teams who reached the semi-finals, respectively.

Pakistan chose to raid first after winning the toss against Australia in their pool ‘B’ clash. Raiders including skipper Irfan Mana, Lala Obaidullah, Kaleemullah Jatt and Bilal Mohsin Dhillon looked in fine form and scored valuable points for the hosts.

On the other hand, Pakistan stoppers Musharraf Janjua, Shani Basra and Zafar Iqbal and their team-mates exhibited similar form.

Earlier after winning the toss, defending champions India maintained their supremacy against a strong Iran team.

In the first half, Iran managed to carry their points parallel to India at 26-23. However, India widened the points gap in the second half and ultimately won 50-39.

Though Sierra Leone won the toss against Germany, they lost the match 43-14.

The World Cup action now shifts to Gujrat’s Zahoor Elahi Stadium. On Friday, hosts Pakistan face Azerbaijan in the first match at 2:30pm while the second match will be played between India and England at 3:45pm.