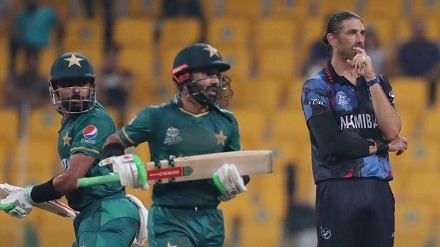 DUBAI: Pakistan defeated Namibia by 45 runs on Tuesday night in Abu Dhabi to become the first side to qualify for the semi-finals of the T20 World Cup 2021.

Chasing a formidable target of 190, the African newbies gave a good account of their ability and promise, and were 83-2 at one point in the run chase. They eventually finished with 144-5 as Pakistan collected the two points they needed to go through the next round.

Babar notched his 23rd Twenty20 international fifty with a 49-ball 70 while Rizwan finished with a 50-ball 79 not out after Pakistan won the toss and batted on a greenish Sheikh Zayed stadium pitch.

The pair added 113 for the first wicket after Pakistan were slow out of the blocks, scoring just 59 in the first ten overs but ended with a flurry in the next ten, taking 130 runs.

Veteran Mohammad Hafeez scored a brisk 16-ball 32 not out with five boundaries.

Pakistan's total is the second highest in this tournament, behind Afghanistan's 190-4 against Scotland in Sharjah.

Pakistan top Group 1 with three wins in as many games and a victory here will see them become the first team to qualify for the semi-finals.

Babar hit seven boundaries before he holed out to David Wiese in the 15th over while Fakhar Zaman was smartly caught by keeper Zane Green for five.

Rizwan reached his tenth half century with a pulled six off Wiese in the 19th over before hitting four boundaries and a six to take 22 off JJ Smit's final over. Rizwan's knock included eight fours and four sixes.