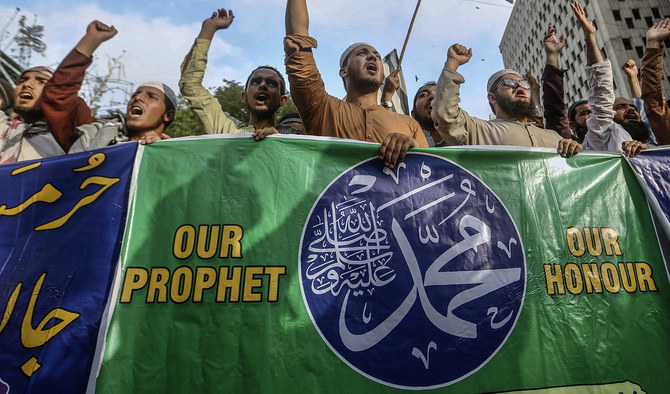 KARACHI:  Pakistan and other Islamic countries continued to put pressure on New Delhi to apologise for hurting the sentiments of millions of Muslims around the world, following derogatory remarks by BJP members about the Holy Prophet (peace be upon him).

According to Reuters, at least 38 people were arrested for rioting in Kanpur while another protest was held in Mumbai.

Top Indian officials remained engaged with managing the diplomatic fallout as more Muslim nations, including Pakistan, Saudi Arabia, Oman, UAE, Maldives, Jordan, Afghanistan and Iran as well as the influential Al-Azhar University in Cairo demanded an apology from the government in Delhi for allowing the derogatory remarks, an Indian foreign ministry official said.

The Organisation of Islamic Cooperation (OIC), in a statement, said: “These insults come in the context of the increasing intensity in hatred of and insults to Islam in India and the systematic harassment of Muslims.”

The 57-member body cited the latest decision to ban the hijab at educational institutions in several Indian states and the destruction of Muslim property to highlight what it said was the Indian government’s bias.

Indian diplomats stationed in the Gulf and neighbouring Islamic countries like Iran and Pakistan were summoned by officials in those countries to protest against the comments by BJP officials.

Its external affairs ministry said in a statement the offensive tweets and comments did not, in any way, reflect the views of the government.

“Strong action has already been taken against these individuals by relevant bodies,” said Arindam Bagchi, a government spokesperson.

The BJP said on Sunday it had suspended a spokesperson and expelled another official for hurting the religious sentiments of a minority community.

Saudi Arabia welcomed the action taken by the BJP to suspend the spokeswoman, while a senior official at the Qatar Embassy in New Delhi said Modi’s government must publicly distance itself from the comments.

“Hurting our religious sentiments can directly impact economic ties,” the official said, adding they were checking reports about boycott of Indian goods by some supermarket owners in Qatar.

Similarly, Reuters reported that a Kuwaiti supermarket had also pulled Indian products from its shelves.

At the supermarket just outside Kuwait City, sacks of rice and shelves of spices and chilies were covered with plastic sheets. Printed signs in Arabic read: “We have removed Indian products”.

Iran followed Qatar and Kuwait by summoning the Indian ambassador to protest in the name of “the government and the people”, state news agency IRNA said late on Sunday.

In Islamabad, both houses of parliament unanimously passed resolutions condemning the BJP leaders’ remarks about the Holy Prophet (PBUH).

In the Senate, the chairman remarked that the resolution would be sent to the UN secretary general and a protest would be registered with him over the matter.

The resolution passed in the National Assembly demanded the Indian government take strict action against the offending BJP leaders and ensure that such remarks should not be repeated. It also urged the international community to take notice of Indias anti-Muslim policy.

According to the Foreign Office, the Indian Charge d Affaires was summoned and conveyed the government of Pakistan’s “categorical rejection and strong condemnation” of the remarks made by two senior officials of India’s ruling BJP).

APP reported that the Indian diplomat was told that these remarks were “totally unacceptable and had not only deeply hurt the sentiments of the people of Pakistan, but also Muslims across the world”.

The army’s publicity wing, Inter-Services Public Relations, also condemned the remarks, saying this was an indication of the extreme hatred the government held towards Muslims and other religions in India.

Federal Minister for Climate Change Senator Sherry Rehman termed the statements “shocking and provocative”, while Information Minister Marriyum Aurangzeb termed the incident “another manifestation of its extremist and seditionist mindset.”

Separately, the US Commission on International Religious Freedom (USCIRF) has recommended India and four other states for designation as ‘countries of particular concern’ in its 2022 report.