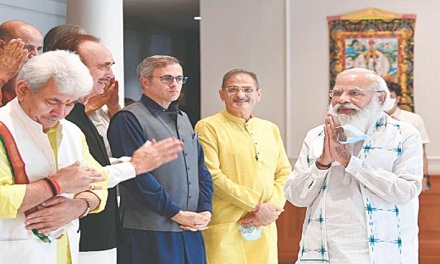 “Yesterday’s meeting achieved nothing. In my view it was a drama that can at the best be called as a public relations exercise that yielded nothing,” Foreign Minister Shah Mahmood Qureshi said at a media conference.

PM Modi had on Thursday met 14 political figures from Jammu and Kashmir with an agenda to initiate the political process in the occupied territory by roping in elements that supported India, but they were critical of the 2019 annexation move.

They were told that the central government would carry out delimitation and hold elections in occupied Jammu and Kashmir. No concrete assurance was given about the restoration of statehood, which was one of the key demands of the participating politicians.

The All Parties Hurriyat Conference was not invited to the meeting that was the first engagement between Delhi and Kashmiri political leadership since the former scrapped occupied Jammu and Kashmir’s special status under Article 370 of the Indian Constitution and bifurcated it into union territories of Jammu and Kashmir, and Ladakh in August 2019.

Foreign Minister Qureshi pointed out that even the ‘handpicked politicians’ called for restoration of political rights, release of political prisoners, end to extrajudicial killings and reversal of illegal and unilateral step of annexation. Kashmiris, he said, were demanding security, protection of their property and employment rights, and were unwilling to accept the demographic restructuring project.

Quoting PM Modi, who had said that the meeting was convened to remove “Dilli ki doori as well as Dil ki doori” (distance from Delhi and distance from the heart), the foreign minister said Kashmiris had lost trust and it could not be restored through the “failed meeting”.

Editorial: Modi’s moot is a signal that India's hardline approach to resolve the Kashmir issue has failed

PM Modi was through the meeting aiming to dilute the mounting international pressure for normalising the situation in occupied Jammu and Kashmir, revive political track, get a consensus on delimitation of constituencies, further his domestic political agenda, especially ahead of the upcoming Uttar Pradesh elections, and pave the way for enforcement of Articles 371 and 371(A-J) of the Indian Constitution that provide special provisions for some states after amendment.

He wanted a clear endorsement from the participating politicians of his scheme for occupied Jammu and Kashmir. But, in an apparent setback for him, that could not happen although some of the participants seemed to be inclined to his ideas during the three and a half hour-long session.

The Indian prime minister had to use the pending case against the revocation of Article 370 in the Supreme Court as a pretext for not giving any commitment on the issue of statehood.

PM Modi may not give up his plan for the political process after what transpired during the meeting but could slow down its pace because of failure to get the much-needed backing. He could therefore not be able to meet the timeline for Kashmir in his mind.

His exclusive delimitation thrust is believed to be aimed at getting a Hindu government in occupied Jammu and Kashmir after the elections which could be a key for the future scheme of things related to the region.

The politicians at the meeting, particularly Omar Abdullah, questioned the timing of the proposed delimitation, which was not due before 2026.

The plan is reportedly to add seven more seats in Hindu-dominated Jammu region to affect the dominance of Kashmir in the occupied territory’s politics.