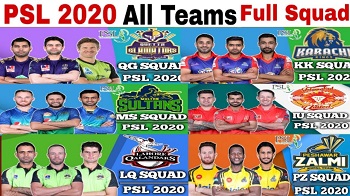 LAHORE: Four teams will be fighing to enter the final of the HBL Pakistan Super League50 when the two semi-finals are played at Gaddafi Stadium here on Tuesday (today). This year’s edition has brought forward two new contenders for the coveted title as Multan Sultans and Lahore Qalandars have gone beyond the group stage for the first time in the history of the event. In the first semi-final, Sultans will face Peshawar Zalmi, the 2017 edition’s winners and two-time runners-up, at 2:00pm, while the biggest rivalry of the event will be ignited once again when Karachi Kings and Qalandars play in the second semi-final, which will commence at 7:00pm. Prior to this edition, only three teams – Zalmi, Quetta Gladiators and Islamabad United – had featured in the PSL finals, which mean that there will be at least one new finalist in the March 18 title showdown.

First semifinal between Sultans v Zalmi: Sultans were the most successful side in the group-stage with six wins from 10 matches. They were perched at the top of the points table for the most part of the tournament and were the first ones to secure a semi-final spot. Zalmi, on the other hand, oscillated from wins to defeats over the course of their 10-match journey to date. They enter the semi-finals ranked fourth with four wins and one of their matches getting washed-out. Sultans came out on top on both occasions when the two teams met in the group matches.

They won the first match by six wickets with as many as 31 balls remaining at Multan Cricket Stadium, their home, and secured a three-run win in a closely-fought match at Karachi’s National Stadium. For Sultans, traveling to Multan played a huge role where they won all three matches and got the desired momentum. Their captain Shan Masood has been leading the batting unit from the front. The left-handed top-order batsman has piled up 253 runs, which include a half-century, at an average of 32. He is the highest run-getter for his side and sits sixth in the chart for the highest overall run-getters. That Khushdil Shah, the hard-hitting middle-order batsman, scored a 70 not out at a staggering strike rate of 241 in their last group match on Sunday bodes well for Sultans, who have their batting-order full of experienced T20 players like England’s Moeen Ali, Ravi Bopara and all-rounder Shahid Afridi.