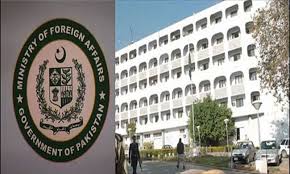 ISLAMABAD: The Foreign Office on Wednesday rejected Indian Prime Minister Narendra Modi's "belligerent rhetoric" against Pakistan, stating that his recent remarks were a "reflection of India’s incurable obsession with Pakistan".

In a statement released today, the FO in response to Modi's remarks from yesterday urged the international community to "take cognisance of Indian leadership’s continuing belligerent rhetoric and aggressive measures, which pose a threat to regional peace and security".

The FO was referring to claims made by Modi during a speech to military personnel on Tuesday in Delhi, where he said Indian forces were now capable of making Pakistan "bite the dust" in less than 10 days.

"Our armed forces will not take more than seven to 10 days to make Pakistan bite the dust," Modi had declared.

Wearing a maroon National Cadet Corps baseball cap at the event in New Delhi, Modi said India's new prowess was a consequence of what he termed as "youthful thinking". Evidence for this prowess, he said, could be gathered from India's strikes in Azad Jammu and Kashmir last year and in 2016.

In 2016, two Pakistan Army soldiers were martyred as Indian troops fired across the Line of Control in Azad Jammu and Kashmir. At the time, Indian army had claimed to have carried out surgical strikes, targeting "terror launchpads" along the Line of Control. The claims were rejected by the Pakistan Army as an "illusion being deliberately generated by Indian to create false effects".

The Indian prime minister's comments follow last year's skirmish between the two nuclear-armed states when an Indian fighter jet was shot down — and the pilot captured — by Islamabad after a rare aerial engagement.

"The Indian prime minister’s threats and provocative statements further illustrate the extremist mindset that pervades the BJP leadership and has evidently permeated the state institutions in India."

Modi is under pressure after weeks of ongoing protests against a new citizenship law that has been widely criticised for being anti-Muslim, a slowing economy and the prospect of losing the latest in a string of state elections in New Delhi next month.

"Pakistan’s immediate and effective response to India’s Balakot misadventure, including the downing of Indian fighter aircraft and capture of Indian pilot last year, should suffice to underscore the will, capacity and preparedness of our armed forces," the statement added.

Modi has alleged that Pakistan continues to wage a "proxy war" against India by backing militants in occupied Kashmir — a charge repeatedly denied by Pakistan — where tens of thousands of people have died in recent decades.