PDM for no-confidence motion against govt 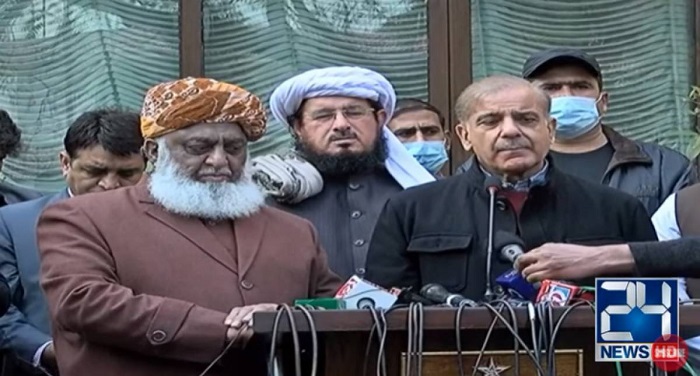 ISLAMABAD: President of the opposition Pakistan Democratic Movement (PDM) Maulana Fazlur Rehman has convened a meeting of the heads of component parties of the alliance on Jan 25 to discuss “options” to dismantle the present set-up under the Pakistan Tehreek-i-Insaf (PTI) which include tabling of a no-confidence motion against the government.

This was announced by the Maulana while talking to reporters after his meeting with Pakistan Muslim League-Nawaz (PML-N) president and Leader of the Opposition in the National Assembly Shehbaz Sharif who visited the PDM chief’s residence here on Wednesday.

“We are considering options which can be used to immediately send this government packing,” said Maulana Fazl while seeking support from the PTI allies. “We appeal to the allies of the government to think in the larger interest of the country and to save the country and the poor people,” said the PDM chief, hours after a similar appeal was made by the opposition members in their speeches in the National Assembly while taking part in the debate on the Finance (Supplementary) Bill 2021.

Maulana Fazl, who is also the head of his own faction of the Jamiat Ulema-i-Islam (JUI-F), asked the allies of the ruling coalition to make a confession that “their decision to form an alliance has not benefited the nation”.

“Yes, I have talked to Hazrat (Maulana Fazl) about it and it has been decided that this (option of tabling a no-confidence motion) will be a part of the agenda of the upcoming PDM meeting. The decision in this regard will be made after a thorough consultation,” said Mr Sharif while responding to a question if the PDM was considering the option of moving a no-confidence motion against the government.

“The time has come to use all constitutional, legal and political weapons,” declared Mr Sharif while lashing out at the government, terming it the “weakest, incompetent and most corrupt regime” in the 74-year history of Pakistan which, he alleged, had ruined the 220 million people of the country.

This is for the first time that the PML-N and JUI-F, the two major components of the PDM, had talked about considering the option of tabling a no-confidence motion in parliament. Earlier, the two parties had always opposed the idea that had initially been floated by the Pakistan Peoples Party (PPP) which was once part of the opposition alliance.

Talking to Dawn on December 14, PML-N senior vice president Shahid Khaqan Abbasi had said his party would not consider moving a no-confidence motion against the PTI governments at the Centre or in Punjab till it was clear that the Constitution was supreme in the country and the system was being run without “interference” as per democratic principles and norms.

“The PPP has stated several times that a no-confidence motion should be moved in Punjab. To test the waters, I ask them to table a no-trust motion against Chairman Sadiq Sanjrani in the Senate where the opposition has a clear and demonstrated majority,” Mr Abbasi had said.

“So far, there have been no deliberations in the PML-N over a definite no-confidence move against the federal or Punjab government, but the option is always on the table. It is not possible to move a constitutional no-confidence motion in a system which is not running constitutionally,” he had said.

Mr Abbasi had said the opposition had already seen the way the situation was allegedly maneuvered for the PTI government in the joint session of parliament in November (where it managed to bulldoze amendments to the Elections Act 2017). “So it is not the right time for any such move (no-confidence motion),” he had declared.

In August 2019, PTI-backed Sanjrani pulled a shock victory and survived a motion of no-confidence pushed by the opposition despite a clear disadvantage in numbers. And the Senate chairman did it again in March defeating PDM’s Yousuf Raza Gilani for the same slot despite weaker strength of the treasury than the opposition in the house.

Maulana Fazl said that in the upcoming PDM meeting they would also finalise the arrangements for the March 23 long march against price hike for which the opposition alliance had already given a call after its meeting last month.

The JUI-F chief criticised the prime minister for inaugurating a 293km-long Hakla-Dera Ismail Khan motorway at a closed-door ceremony in Islamabad and announced that the people of the area would themselves inaugurate the project on Feb 5. He said that after expressing solidarity with the people of Kashmir in Islamabad on Feb 5, he would lead a rally from Hakla to his hometown D.I. Khan and would appeal to the people of all districts in the region to come to the motorway and inaugurate the project that had been completed under the China-Pakistan Economic Corridor (CPEC).

In response to a question, the Maulana rejected a decision of the Election Commission of Pakistan (ECP) to seek army’s help during the second phase of local government polls in Khyber Pakhtunkhwa where his JUI-F had defeated the PTI in the first phase of the polls. He said the ‘institutions’ which always interfered in the politics had stayed away from the LG elections which resulted in his party’s victory.