PDM vowed to go ahead with long march 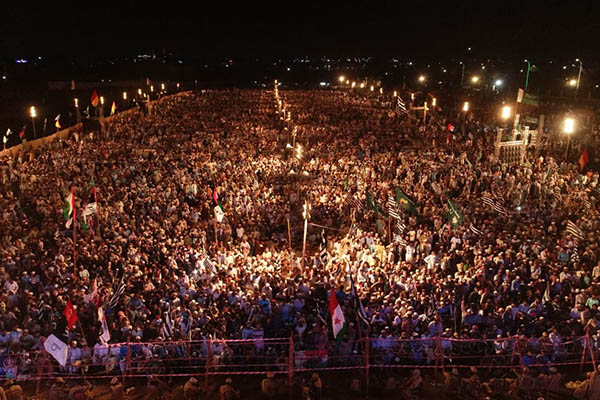 ISLAMABAD: The opposition Pakistan Democratic Movement (PDM) on Tuesday vowed to go ahead with its planned long march against price hike on March 23, but drop­ped the idea of moving a no-trust motion against the government in the parliament, considering the time inappropriate for such a move.

Talking to reporters after presiding over a meeting of the heads of the component parties of the alliance, PDM president Maulana Fazlur Rehman criticised the government over its reported plan to seal the capital city on March 23 due to the military parade and presence of some foreign dignitaries, declaring in categorical terms that the protesters would enter Islamabad, come what may.

“The PDM will enter (Isla­m­abad). They (the government) already knew that a huge march of the PDM is coming (to Islamabad) on that day. Under which conspiracy, they have prepared such recommendations,” said the Maulana when his attention was drawn to the government’s reported plan to impose a curfew-like situation in the capital on March 23 due to the military parade and a meeting of the Organisation of Islamic Cooperation.

“As far as the parade is concerned, it is held in the morning and ends by Zuhr prayers time. And we will be coming after Zuhr prayers so there will be no (chance of a) conflict,” he said.

Last month, the PDM had given the call for holding a long march to Islamabad against price hike on March 23 after which federal Minister for Interior Sheikh Rashid Ahmed had requested the alliance leadership to change the date of its protest as the nation would be celebrating March 23 as a national day and there would be some foreign guests in the country on the occasion. The minister had indirectly conveyed to the PDM that there was a possibility that the government might have to seal the capital city as a security measure due to Pakistan Day parade and other activities.

The Maulana intelligently skipped a specific question whether the PDM would begin its march from different parts of the country on March 23 or they had a plan to reach the capital on the day, which is celebrated as Pakistan Day.

However, later talking to media, senior vice-president of the Pakistan Muslim League-Nawaz (PML-N) Shahid Khaqan Abbasi said that the participants of the long march would “definitely” enter Islamabad on Pakistan Day and stage a sit-in at famous D-Chowk, situated in front of the Parliament House building on Constitution Avenue.

In response to a question, Mr Abbasi ruled out the possibility of turning the protest into an indefinite sit-in, but said they had not yet decided about its duration.

Asked about the reason for dropping the proposal of tabling a no-confidence motion against Prime Minister Imran Khan, Mr Abbasi said such moves were always kept secret. To make the no-confidence successful, he said, they would be requiring the support of at least 172 members in the 342-member National Assembly, which they presently did not have.

Mr Abbasi said they would move the motion when they would be sure to have the support of 172 members in the assembly and that the “establishment” was not behind the ruling coalition.

“There was a long queue of those (treasury) members who wanted to join (us) when there was an impression that the establishment had withdrawn its support (to the government),” he said.

“The time will tell this. The ISPR says they are not behind (the ruling coalition). But the treasury members told us that they received telephone calls for voting on the money bill and the State Bank bill,” said Mr Abbasi, when asked if the opposition believed that the establishment was still supporting the present set-up.

Earlier during the press briefing, when a reporter asked a question about the option of no-confidence motion, the Maulana said that they had not taken any decision in this regard.

“No-confidence motion is a part of democratic and parliamentary system. But for it, there is a need for complete preparation. There can be no final decision until all the opposition parties and the forces inside the parliament are on the same page,” said Maulana Fazl.

In response to another question, he expressed his annoyance over the decision of the Pakistan Peoples Party (PPP) to hold its own anti-government long march on Feb 27.

Maulana Fazl, who is also the chief of his own faction of the Jamiat Ulema-i-Islam, said the PDM had rejected the recently-passed “mini-budget” and asked the government to immediately withdraw it. He lashed out at the government over the proposed bill granting autonomy to the State Bank of Pakistan, alleging that the country’s institutions were being handed over to international financial institutions.

He said inflation had broken the back of the country’s citizens and trapped the nation in a place where there was no possibility of escape.

“A ruler who can’t fulfill the responsibility of the common man or the economy has no right to remain in power,” he said while criticising the government over unprecedented inflation.

He alleged that Imran Khan had been proven a “criminal” in the foreign funding case. He called on the Election Commission of Pakistan to conduct daily hearings in the case, disqualify the prime minister and ban the Pakistan Tehreek-i-Insaf (PTI).

“Those parties which are formed by external powers are not true representatives of the people,” he added. He also called for action against the prime minister and Punjab Chief Minister Usman Buzdar over the Murree tragedy.

Last year also, the PDM had announced that it would hold a “decisive” long march to Islamabad on March 26, but it had to cancel the plan just two weeks before the announced date when the PPP and the ANP objected to Maul