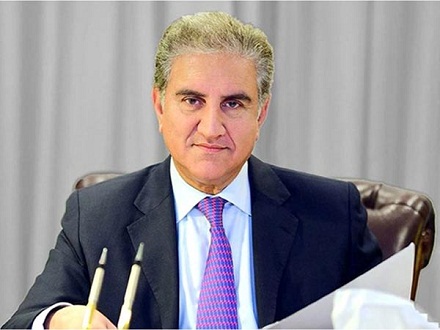 MULTAN: Foreign Minister Shah Mehmood Qureshi Saturday said peace in Afghanistan was necessary for regional peace and Pakistan was consulting the Afghan neighbouring countries for permanent peace for development, prosperity and uplift of the war-torn country.

Speaking at a press conference at Raza Hall, he said he briefed the Chinese authorities over Dasu terrorist incident, and both the countries agreed on making joint efforts to foil sabotage missions against China-Pakistan Economic Corridor (CPEC), which is the project of regional development. In response to a query that Moscow says the ISIS militants were arriving in Afghanistan from Iraq, Libya and Syria for terrorism, he said Taliban would not allow the ISIS militants to penetrate their country. The Afghan forces had the capacity to combat ISIS in Afghanistan, he added.

He was asked if Taliban take over Afghanistan and warlords continue insurgency, then what would be the future of CPEC. The FM said some people were conspiring against CPEC, and Dasu terrorism incident against Chinese engineers was part of that conspiracy. However, he claimed that no group could harm CPEC projects.

Punjab Minister for Energy Dr Akhtar Malik said the cabinet committee would soon approve all the powers including the Rules of Business and organise the sub-secretariat, which would have positive results.