Petroleum prices to go down up to 57 per cent 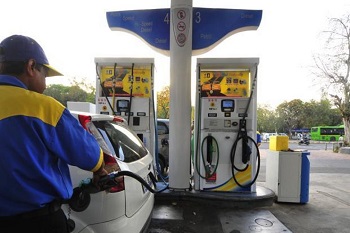 ISLAMABAD: The prices of petroleum products in Pakistan are set for a steep fall — up to 57 per cent — on Thursday (today) for a month owing to about 30pc slump in the international oil market.

Though a decision would be announced in consultation with the International Monetary Fund (IMF) on Thursday, the Oil and Gas Regulatory Authority (Ogra) has worked out up to 57pc cut in various products’ prices with effect from May 1 based on existing tax rates.

At present benchmark Brent crude prices have plunged by a massive 30pc to $20 a barrel from about $27 per barrel on March 25 when Pakistan last revised oil prices. The Brent crude price has tumbled by almost 65pc since February 25. This is the steepest fall in oil prices in recent history.

An official said that based on existing tax rates, Ogra had calculated about Rs33.94 and Rs20.68 per litre reduction in the prices of high speed diesel (HSD) and petrol, respectively.

In contrast, he said, the Ministry of Finance and the Federal Board of Revenue (FBR) were trying their best to pass on about half of the price reduction calculated by Ogra to consumers and retain the remaining amount as windfall by increasing the rates of petroleum levy.

He said the finance ministry wanted to make up for revenue losses arising out of lower import parity price for crude and petroleum products and lower consumption due to the lockdown and the overall revenue shortfall it had faced in the first 10 months of the current fiscal.

The Ogra summary of workings on oil pricing seen by Dawn has proposed about 31.6pc reduction in the price of HSD. It has worked out the ex-depot price of HSD for next month at Rs73.31 from Rs107.25 at present, down Rs33.94 per litre.

Similarly, the ex-depot price of kerosene has been worked out at Rs33.38 per litre instead of current rate of Rs77.45, showing a massive reduction of 56.9pc or Rs44.07 per litre.

The official said the prime minister had been told that reduction in HSD price would be great support to the agriculture sector, currently at the peak of wheat harvest, and help pull down the rate of inflation because it was the primary source of transportation in the country.

The government has already increased the general sales tax (GST) on all petroleum products to a standard rate of 17pc across the board to generate additional revenues.