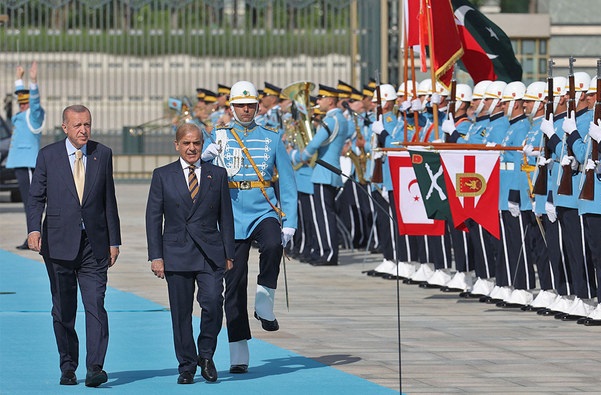 ISLAMABAD: Foreign Office confirmed about Prime Minister Shehbaz Sharif’s upcoming visit to Turkiye, the spokesperson said it was “taking place as planned”. Foreign Office on Thursday during the weekly briefing said that the prime minister will visit the country for a two-day trip on Friday at the invitation of President Recep Tayyip Erdogan.

“Pakistan and Turkiye enjoy fraternal ties deeply embedded in commonalities of faith, culture and history and underpinned by exceptional cordiality and mutual trust,” she said.

The two leaders will inaugurate PNS Khaibar, a MILGEM Corvette Ships of the Pakistan Navy at the Istanbul Shipyard, she told the reporters.

The contract for four Milgem class corvettes for the Pakistan Navy, with concurrent Transfer of Technology, was signed with ASFAT Inc, a Turkish state-owned Defence contractor firm in 2018.

The MILGEM project, a joint collaboration between the two countries, represents a “significant milestone” in the Pakistan-Turkiye strategic partnership, she remarked.

The two leaders will also hold wide-ranging discussions on the regional situation and other issues, she added. The prime minister will also interact with the Turkish business community.

“Unfortunately, India continues to abuse its non-permanent membership of the UN Security Council and the Chair of the 1373 Counter-Terrorism Committee to target Pakistan through false narratives and malicious propaganda”, she noted.

She said India’s irresponsible behaviour confirmed that it “neither has the competence nor the wisdom” to qualify as a permanent member of the Security Council.

She also censured India for its “blatant human rights violations” in held Kashmir.

“We have not seen any improvement in the situation in [held Kashmir] as it remains under military siege and Indian oppression there continues unabated.”

About the recent decision to establish the ‘Loss and Damage Fund’ at the COP-27, Ms Baloch said the parties also agreed to establish a transitional committee for recommendations to operationalise the Fund and determine its terms of reference for new funding arrangements and disbursement mechanism.

“Once these details are ironed out, we will be able to predict the future funding situation”, she said.

When reporters asked about the reasons behind the delay in the appointment of a new foreign secretary, Ms Baloch said: “This is a decision taken at a very senior level. What I can share with you is that the Ministry of Foreign Affairs is continuing to perform its functions to the best of its abilities as we have always done in the past.”

FO Spokesperson Mumtaz Zahra Baloch agreed that there were issues at the Pakistan-Afghanistan border.

She said the Chaman border was reopened on Monday following Border Flag Meetings between the two sides. The focus of these meetings was to clear pedestrian, traffic and trade consignments, she added.

The ‘Friendship Gate’ at the border was closed on Nov 13 after an armed man from the Afghan side opened fire on Pakistani security personnel, resulting in the martyrdom of one soldier.

Ms Baloch said Afghanistan has communicated its “serious regret” over the incident and constituted a high-level committee comprising officials from foreign and border and tribal affairs ministries, local chambers of commerce and tribal elders to investigate the incident.