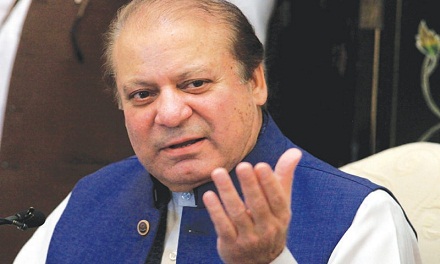 LAHORE: Putting to rest speculation that the Pakistan Muslim League-Nawaz (PML-N) is considering revisiting its policy of civilian supremacy, the party’s supreme leader Nawaz Sharif has categorically stated that there is no change in its stance.

The party, he declared, would not retreat and would continue its struggle against the transgressors of the Constitution.

Deposed prime minister Nawaz Sharif posted a series of tweets on Monday, reaffirming his party’s stance in the face of back-to-back defeats in the Azad Jammu and Kashmir elections and the Sialkot by-poll.

“This struggle is not for winning or losing seats (in AJK polls) but for freedom from… transgressors of the Constitution and standing on the right side of history without compromising on our self-respect,” Mr Sharif said. He has been in London since November 2019 for ‘medical treatment’.

The losses in the recently held AJK polls despite the PML-N’s apparently huge rallies and a shocking defeat in the by-poll on a provincial assembly seat in Sialkot that it had won in 2018 with a margin of over 17,000 votes had generated a debate within the party that it should revisit Nawaz’s narrative that every institution must function within its constitutional role, and give a chance to his younger brother Shehbaz Sharif’s narrative of reconciliation, which was about mending the party’s relations with the establishment.

Nawaz Sharif’s statement came a day after Shehbaz reiterated in an interview to a private TV channel his stance of a grand dialogue between all stakeholders to steer the country out of crises.

Wondering how the Pakistan Tehreek-i-Insaf (PTI) grabbed 26 seats in AJK, Nawaz tweeted: “The PTI with 600,000 votes got 25 seats and PML-N with 500,000 won six seats. Who will believe this? During the campaign (in AJK) the PML-N held historic rallies and the participants’ passion was worth witnessing, while on the contrary empty chairs at public meetings of the government officials had another story to tell.”

He further said: “The manner in which the results of AJK and Sialkot by-polls were achieved had come to light much before the polling day. More facts in this respect will be uncovered in the coming days.”

Talking to media on Monday a PML-N leader from Punjab said: “Mr Sharif has responded to those voices in the party who wanted him to give a chance to Shehbaz’s narrative. The elder Sharif’s message is quite clear – no change whatsoever in the policy of confrontation (give respect to the ballot),” he said, adding that the party members hoping to mend relations with the establishment through Shehbaz would be disappointed.

Rumours of Shehbaz’s resignation after the AJK and Sialkot by-polls should also be seen in that context, the leader insisted, adding that “it was a pressure tactic applied by the Shehbaz group to force Nawaz into showing some flexibility”.

Although the top PML-N leadership has been blaming systematic rigging for their loss in the recent polls, some party lawmakers and other leaders are not taking the allegations seriously, believing that ‘blessings of the powers that be’ did matter in the end.

Some PML-N lawmakers say they are reading a clear message in the results of the recent polls that the party may not have a chance to return to power after the 2023 elections if the narrative of Nawaz and his daughter Maryam continued.

Meanwhile, PML-N senior vice president Shahid Khaqan Abbasi also disagreed with Shehbaz’s statement during Sunday’s interview that “Nawaz could have been elected prime minister for a fourth time had the party evolved a consensus strategy before the 2018 elections”.

Talking to a private news channel, Mr Abbasi said: “The party’s strategy is made by its president (Shehbaz). I would like to ask Shehbaz Sahib what strategy could we have evolved before the 2018 polls that could have helped us return to power.”