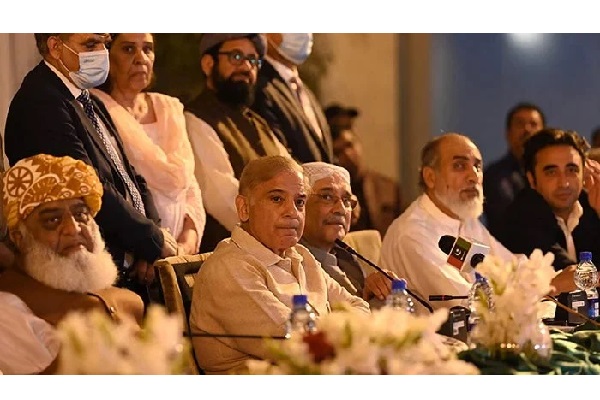 LAHORE: The Pakistan Muslim League-Nawaz (PML-N) has summoned a meeting of its parliamentary party in the Punjab Assembly to discuss options available for dislodging the alliance of Pakistan Tehreek-i-Insaf (PTI) and Pakistan Muslim League (PML-Q) ruling the province or at least barring it from dissolving the assembly.

The parliamentary party will meet at PML-N’s provincial secretariat in Model Town on Monday (today) under the chairmanship of opposition leader Hamza Shehbaz.

PTI Chairman Imran Khan had announced in Rawalpindi on Saturday that party members would tender their resignations from Punjab and Khyber Pakhtunkhwa assemblies, the two provinces where the Imran-led party is in power, to put pressure on the Pakistan Democratic Movement (PDM) government in Centre for early elections across the country.

The opposition parties in the 371-strong Punjab Assembly enjoy the support of 179 MPAs — 167 of PML-N, seven of PPP, four independents and one of the Rah-i-Haq Party. They need seven more votes to see a no-confidence motion succeed against PTI-PML-Q-supported Chief Minister Parvez Elahi.

The opposition cannot pin its hopes on the backing of the disgruntled legislators among the PTI and PML-Q ranks because as per the Supreme Court’s orders their votes would not be counted if polled against the party policy, while they would also stand disqualified as assembly members.

The other possibility is that the governor asks the chief minister to take a vote of confidence as in this case the disgruntled members of the ruling alliance may abstain during the no-confidence vote and may also avert their likely disqualification.

The huddle will evaluate the petition for the review of the apex court’s orders on the Punjab chief minister’s election.

In an apparent move to bar the governor from directing the chief minister to take a vote of confidence under clause 7 of Article 130 of the constitution, the PTI-PML-Q alliance is keeping the assembly in session, whose sittings are held after weeks and without any worthwhile business.

However, legal experts, like Usama Khawar, believe that the relevant constitutional provision puts no bar on the governor’s authority to ask the chief minister to seek a vote of confidence if in his (governor’s) opinion the CM has lost majority in the house.

“Nowhere in the Constitution has it been stated that the governor cannot summon a special session for taking a vote of confidence by the chief minister if the elected house of the relevant province is already in session,” he said.

In the meantime, PPP has also begun seeking signatures of its Punjab Assembly members on a no-trust motion. As a couple of MPAs, including Syed Ali Haider Gilani, are presently abroad, they are being sent the document for signatures through courier service, a senior party leader told Dawn.

Meanwhile, in a bid to pave the way for the PDM government in Punjab, PML-N leader Ishaq Dar called on PPP leader Asif Ali Zardari in Islamabad. The former president is expected to travel to Lahore soon for ‘Mission Lahore’.

Sources in PPP said the purpose of ‘Mission Lahore’ is the ouster of the ruling PTI-PML-Q alliance and Mr Zardari will be staying in the provincial capital for a while to execute his strategy.

Mr Khan’s announcement resulted in a flurry of political activities in Khyber Pakhtunkhwa as well where all major opposition parties decided to consult their central leadership to formulate a strategy to counter a potential move by the PTI to dissolve the assembly.