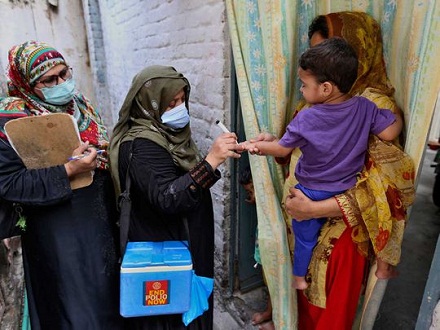 PESHAWAR / SOUTH WAZIRISTAN: A policeman returning from polio duty was martyred in an attack on the outskirts of provincial capital while a cop was injured in South Waziristan tribal district when a police mobile guarding polio vaccinators hit a landmine on Sunday, police said.

Separately, a soldier was martyred and another injured in a militant attack on a check-post in the Zangara area of South Waziristan district.

In Peshawar, a policeman belonging to the Frontier Reserve Police who was returning from polio duty was targeted by unknown assailants in the Duadzai area on the outskirts of the city. Police official said the cop, identified as Asif, died on the spot.

A police statement quoted capital city police officer Abbas Ahsan as saying that police were investigating the incident form various angles, including targeted killing. He said police investigators had collected evidence from the scene of the attack and the area has been cordoned off for a search operation.

In the second incident, a police van on polio duty hit a landmine on Badar Bridge in Ladha subdivision of South Waziristan.

South Waziristan DPO Shaukat Ali told reporters that the police mobile was patrolling the area when the blast took place. He said a policeman was injured and the vehicle damaged.

No group has claimed responsibility for these attacks so far.

The Khyber Pakhtunkhwa government launched a five-day polio vaccination drive in 18 districts of the province on Saturday to vaccinate around 3.7 million children against the crippling disease.

Police officials said that Naib Subedar Raja Tahir got injuries in the firing incident. He was shifted to a hospital in Scout Camp, Wana.

Following the attack security forces launched a search operation in the area. Sources said three suspects had been arrested during the operation. All link roads in the area have been closed for traffic.

Three soldiers have been martyred in attacks on security forces in North and South Waziristan since Friday. Two soldiers were martyred and nine others injured in different areas of the two districts on Friday and Saturday.