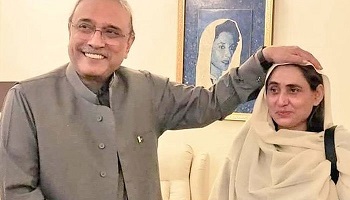 She had reportedly gone to village Ali Murad Khokhar to attend the chehlum of her brother-in-law Zahid Khokar when she came under the gun attack by a nephew of the deceased. Naushero Feroze Senior Superintendent of Police (SSP) Dr Farooq Awan said the MPA was murdered in connection with a property dispute.

She was taken to the People’s Medical Hospital Nawabshah where she was pronounced dead on arrival by doctors.

Police cordoned off the area and launched search for the suspects. Police said that Ansari had decided to attend her brother-in-law’s chehlum even knowing about the tensions that existed between her and Khokhar’s nephew. It said an investigation will be conducted to ascertain how many individuals were involved in the attack on Ansari.

Ansari had recently written to Naushehro Feroze deputy commissioner and the senior superintendent of police (SSP) to inform that she and her sister feared for their lives after Zahid Khokhar’s passing. Her husband, Dr Hameed Ansari, told media that she had been constantly receiving death threats, and that she had informed SSP Farooq Awan about those. “We had requested a police squad [for protection],” he said. “There was no police present at the place where the chehlum was being held,” he said.

Shehnaz Ansari was active within the PPP and was deeply involved in Sindh’s political scene. She was also the district president of the PPP Women’s Wing in her constituency.