Protests against India new citizenship laws held in 30 US cities 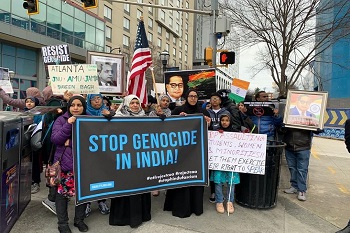 WASHINGTON: Protests against India’s new citizenship laws were held in 30 US cities on Sunday as thousands of Indian-Americans came out on the streets to vent their anger.

Embassy officials and their security staff tried to stop the protesters from getting close to the main entrance but gave up as the crowd pushed ahead, peacefully.

Like their compatriots in India, protesters in Washington too seemed to draw inspiration from Urdu poetry as those outside the White House sang Allama Iqbal’s Saare Jahan se Accha before marching down to the embassy to join the crowd already camping there. Hundreds of Khalistan supporters also protested outside the embassy, but in a separate enclave the local police had carved out for them.

Protesters at the White House petitioned President Donald Trump to ask Mr Modi to repeal the controversial citizenship law when he visits New Delhi in February.

They urged US Secretary of State Mike Pompeo to add India to a list of nations that commit severe violations of religious freedom. The designation can trigger economic sanctions.

The protesters also urged the US State Department to “heed the recommendation” of the US Commission for International Religious Freedom and impose a travel ban on India’s Home Minister Amit Shah.

The protests were organised by the Coalition to Stop Genocide, which includes various Indian diaspora groups that observed the Indian Republic Day as the day of action against the Modi government and its policies.

Throughout the three to four-hour long march from the White House to the Indian Embassy, the protesters chanted slogans against the “racist and anti-Muslim” policies of the Modi government.

Organisers of the Washington rally later told journalists that such laws were made to isolate India’s more than 250 million Muslims and turn them into second-grade citizens.

They pointed out that nearly two million people were dropped from the citizenship list in Assam alone and many fear a nationwide NRC will possibly render millions of Indian Muslims stateless.

“I can’t go back to India right now. But I have come here to protest the war Modi has started against India’s Muslims,” Mustaqeem, a protester in New York told Al Jazeera.